Your child has a concussion. Now what? 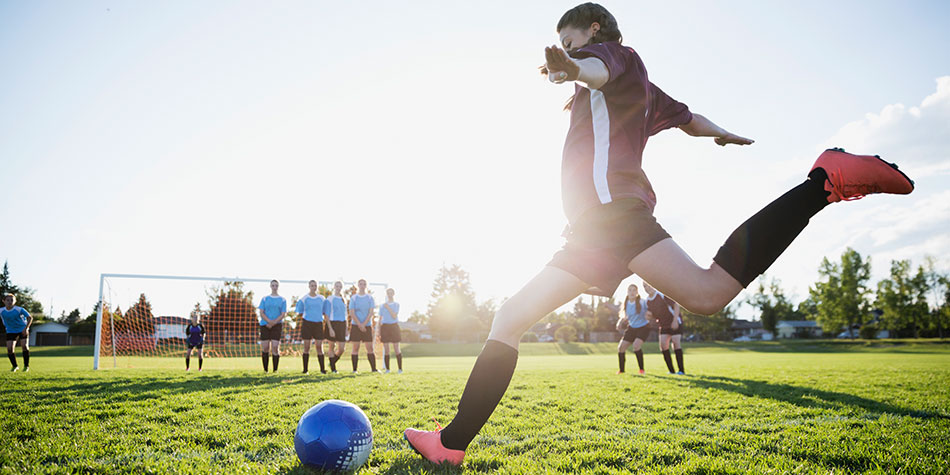 With spring around the corner, your kids may be excited about the start of a new sports season. But popular contact sports like these come with a very real concern: concussions.

There’s good reason for the worry. Up to 2 million sports- and recreation-related concussions occur annually among kids and teens.

It’s true that certain sports—football, soccer, lacrosse, ice hockey and wrestling, among them—carry a higher chance of concussion. But any type of physical activity poses some risk.

And even if your child takes every precaution, a concussion can still happen. That’s why it’s important to be informed. Here’s what you need to know about recognizing telltale signs, knowing when to seek medical help, and following the necessary steps to ensure a safe and effective recovery.

Your child doesn’t have to be knocked unconscious to have sustained a concussion. They also may not show signs right away. But, generally speaking, the following symptoms of concussion may crop up within the first hours after a head injury:

Other symptoms may manifest over the following days:

If your child shows signs of a concussion, it’s important to see a doctor right away, whether it’s going to your pediatrician’s office or heading to the emergency room. Your healthcare provider (HCP) will likely ask how and when the injury happened, inquire about symptoms, perform a physical exam and have your child do basic exercises to test balance, coordination, reflexes, memory and concentration.

If the concussion happens during a sporting event, a coach or athletic trainer may be equipped to do sideline testing to determine whether immediate medical care is warranted. The bottom line: Your child should stop playing right away if there’s any suspicion of a concussion.

Contrary to popular belief, kids don’t automatically need imaging tests after a blow to the head. These tests check for brain bleeds or other serious injuries, but the risk is low in the case of a mild concussion.

The physician who examines your child will assess the need for a scan. It will likely be ordered if a child was unconscious for more than a few minutes, if they can’t stop vomiting, if they’re having seizures, if their headache is constant and worsening, or if they have bloody or clear fluid coming from their ears or nose. Head CT scans are the gold standard since they’re fast, easily available in hospitals and require minimal if any sedation.

Ease back into activity

If your youngster suffers a concussion, they should not return to sports right away. Kids who resume activity too soon tend to have worse symptoms than those who stay on the sidelines, and some research suggests that overdoing it too hastily may also lengthen recovery time.

You’ll also want to keep your child away from any activities that could lead to a second head injury. In other words, just because your recovering football player stays off the gridiron doesn’t mean he can go skateboarding or mountain biking.

Teens who performed 20 minutes of light to moderate aerobic activity, like jogging on a treadmill, starting about 48 hours after a concussion recovered about four days faster than those who just did stretching, found another study published in the April 2019 JAMA Pediatrics.

The key is finding a balance between being totally inactive and rushing back into the game. Experts typically recommend a full 24 to 48 hours of physical and cognitive rest to start. After that, your child can restart daily activities as long as doing so doesn’t bring on symptoms like headache.

Once they are able to do that, they can begin such light aerobic exercise as walking or stationary biking. If that feels fine, your child can start sport-specific exercises, such as running, gradually increasing the intensity and adding in resistance training. Once they’ve mastered that, they can get back to practice and then, finally, back to play.

Some patients, such as those with especially severe symptoms or a history of previous concussions or migraines, may require a longer recovery time. Some research also suggests that girls may take longer to recoup. Consult with your child’s HCP to make sure their recovery is moving at the appropriate pace.

Don’t rush back to school, either

The same approach holds true for schoolwork. While it’s generally fine to return to school after 48 hours, kids need to ease back into it. As with physical exertion, overdoing it mentally after a concussion may delay recovery. The American Academy of Pediatrics (AAP) recommends kids not go back to school until they can handle blocks of mental stimulation lasting 30 to 45 minutes.

Your child may also need other accommodations, such as early dismissal from each class so they have more time to get to the next one, additional breaks during long classes, reduced exposure to computers and videos, eating lunch in a quiet room instead of a noisy cafeteria, and skipping gym, band or shop classes.

And screen time? While some kids with sensitivity to light may find that looking at monitors brings on symptoms, there’s no research to show that using screens makes it harder to recover. Each kid’s level of tolerance will guide how much to cut back.

Treat side effects as needed

Even during recovery, some symptoms may hang around, particularly headache, nausea and sleep problems. Over-the-counter pain relievers, such as ibuprofen or acetaminophen, can help ease the headache pain, and the prescription drug ondansetron (Zofran) can relieve temporary nausea. These may be used in the short term as long they don’t lead to worsening symptoms.

It’s essential, though, not to use these medications in place of proper recuperation or as a means to mask symptoms to get back onto the playing field.

Most of the time, kids with concussions are back to their old selves after about four weeks. But if multiple symptoms linger beyond that milestone, your child should see an HCP who specializes in concussions.

They may prescribe treatments like vestibular therapy to help improve balance or speech therapy to help strengthen memory and problem-solving skills. HCPs can also check to make sure that symptoms aren’t caused by another undiagnosed injury or condition.

Some concussion patients may develop symptoms of depression, either as a result of the injury itself or stemming from the stress, social isolation and inactivity that often results from it. If your child seems unusually sad, anxious or withdrawn, your doctor may make a referral to a mental health professional.

Try to prevent a second concussion

While there’s no way to guarantee that a concussion won’t happen again, there are things you can do to help keep your kids safe.

The most important is to never let your child play sports—or any activity that could increase their risk for head trauma—until they have fully recovered. That’s because having a second concussion during recovery from the first—a condition known as second impact syndrome—may cause serious impairments and, in rare cases, even death. Research suggests that it may take relatively little force to cause those dangerous second injuries in a recovering brain.

You may also have heard of chronic traumatic encephalopathy (CTE), a condition marked by changes in behavior, mood and cognitive abilities that is believed to be caused by repeated blows to the head over the course of a career in collision sports like football. It’s impossible to definitively diagnose CTE in living athletes (it can only be confirmed by autopsy), and it’s difficult to say whether young athletes who play contact sports are at increased risk. But the specter of CTE is yet one more reason to make sure that young athletes recover fully from concussions.

Soccer headgear is iffy: Due to a lack of evidence demonstrating its benefit—and some research that suggests it may even increase the risk of head injuries—the AAP doesn’t support its use.

It’s also crucial to educate athletes about the seriousness of concussions and to encourage them to inform everyone around them—teammates, coaches, trainers, parents, HCPs—if they’ve experienced a head injury and are having any symptoms.

Kids should be reminded never to hide their symptoms in order to “tough it out” and stay on the field.

When an unexpected, severe injury or illness occurs, you need high-quality care fast. With 11 emergency rooms (ERs) in our network, HCA Midwest Health is here for you when an emergency situation arises. Our hospital and freestanding ERs provide 24/7 emergency care to patients of all ages with locations throughout Kansas City and its surrounding communities. Learn more at KCFastER.com.

March 11, 2022
Before your family jumps in, review these tips to help everyone have a safe summer in the water.
Previous Post
HCA Midwest Health

March 11, 2022
To prevent common roadside problems from ruining your trip, keep these items in your car.
Next Post
Back to blog home