Can you get the flu from the flu vaccine? 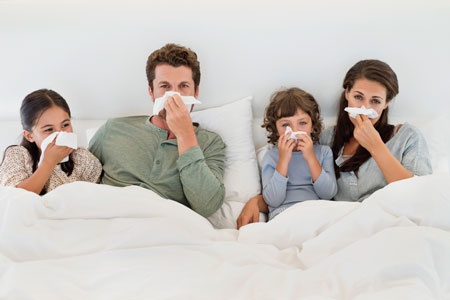 During the 2017-2018 flu season, the CDC reported just over 45 percent of U.S. adults received the influenza vaccine. That’s less than half – and far below the goal of 70 percent of adults vaccinated. The fact is, the flu vaccine remains one of our best defenses against this potentially deadly disease. The myth is, you can catch the flu from the vaccine. Listen well – you cannot catch influenza from the vaccine.

“Every year I have a number of patients tell me they are concerned about getting sick from the flu shot,” says family medicine physician Brad Craemer, MD of Overland Park Regional Medical Center part of the HCA Midwest Health network. “The truth is, the vaccine does not cause clinical influenza infection. It’s not possible to catch the flu from the flu vaccine.”

Dr Craemer answers eight burning flu questions to kick this myth to the curb once and for all.

Why get the flu shot?

Every year, thousands of people die from flu-related causes, and during a “good” flu season, the CDC estimates that 8 percent of people in the U.S. – around 26 million – could get the flu. It is a vicious virus that can bring down even the healthy, and is especially dangerous for immune-compromised people, and infants. In addition, people with chronic medical conditions such as diabetes, cancer, asthma or others may be at higher risk for complications from the flu.

“There are multiple reasons to get the flu shot, one of which is to reduce the likelihood that you will get the flu,” stresses Dr. Craemer. “In addition, getting the flu shot protects those you come in contact with who may not be able to get the shot, or are unable to fight off the flu, such as newborns, immune-compromised people and the elderly. Immunizing the population as a whole reduces the potential for large outbreaks of influenza by stopping it from spreading to the people who are immunized, and the people they may otherwise infect.”

Even in cases where someone gets the flu after being vaccinated – likely caused by pre-vaccination exposure – flu symptoms and complications will be less.

How do we know the flu shot won’t give us the flu?

There are two types of vaccine, Dr. Craemer says, neither of which can give you the flu:

What about those who get a flu shot and then get the flu right afterwards?

Chalk it up to timing if you get the flu around the time of your flu shot.

“People can, and often do get an influenza-like illness or a cold around the time the flu shot is given, but it’s not from the vaccine,” Dr. Craemer says. “We recommend/give flu shots in early fall, the beginning of the cold and flu season when rates of illness in the general population are rising.

“Think of it this way. If people get sick one-to-two times per year on average, and get a flu shot annually for 20-30 years or more, it makes sense that at some point in time we will all get sick around the time we get our flu shot. But that doesn’t mean the shot caused the illness.”

Who should get vaccinated?

The CDC recommends anyone six months or older who hasn’t had any type of reaction to a previous flu vaccination get vaccinated. The vaccine is especially important for those at high risk: pregnant women, the elderly, the immune-compromised and young children.

If you are allergic to eggs or had a reaction to a previous vaccination, talk with your doctor to determine your options.

The flu shot is approved for anyone over six months of age. Because the nasal spray is a “live,” albeit weakened virus, it is not recommended for kids under two and certain other groups:

Does the flu vaccine have side effects?

Sometimes people have short-lived and relatively minor “flu-like” symptoms (aches, low fever) after receiving the vaccine. It could be your body’s reaction to the vaccine as it produces antibodies against the flu, or possibly that you were exposed to the flu before being vaccinated or during the two-week window it takes for the shot to take full effect. It could also simply be a cold or other illness that coincides with your flu shot timing.

Why do we have to get vaccinated every year?

“Flu viruses evolve each year,” explains Dr. Craemer. “It takes months to produce the millions of flu shots we need, so pharmaceutical companies can’t wait to see what the current season brings and make the shot out of those viral strains. Therefore we use the strains of the prior season as directed by the CDC’s recommendations.”

That’s why there are some years where the “match” between the flu shot and the circulating flu strains is very close, and other years the match is less accurate, meaning that from year to year the vaccine may be more or less effective based on the match. However, even in years where the match is not that close, vaccination lessens the severity of flu symptoms and complications.

Whether you need your annual flu shot, or to see a doctor about flu-like symptoms, we’re here for you and your loved ones with 9 urgent care clinics and over 35 primary care locations in the Kansas City area.

Get answers to common questions about delivering a baby during COVID-19.

Know where to go: How to choose between your doctor...

September 30, 2020
By Kansas City – How to know when you should go to your doctor, urgent care or the emergency room.
Next Post
Back to blog home

The air that you breathe… is it harming you?

How to stay safe on a snow day

How to stay healthy when going back to the office

How to avoid germs throughout the day

A runner's guide to cold weather