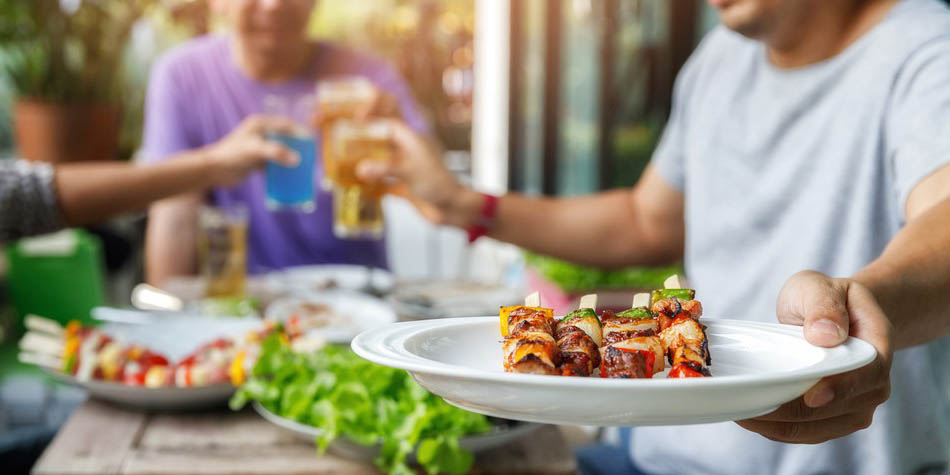 In-season foods make for great grilling options, either as a main dish or as a side with a grilled protein.

Summer is here, which means it's time to fire up the grill. There are several benefits to grilling food. Vegetables, for example, retain more of their vitamins and minerals when grilled. There are plenty of healthy grilling recipes you can try this summer that use seasonal produce. You can use the produce as your main dish or as a side to accompany a protein of your choice, such as chicken or fish.

Why is it important to eat food that's in season?

The seasonality of food refers to the time of year when certain foods are at their peak in terms of harvest and flavor. Seasonal foods tend to be fresher and more nutritious. Foods that are out of season are usually less flavorful because they start to lose their nutritional value once they've been harvested. It's even better if you can buy your seasonal produce from a local grower, since produce also loses its nutritional value during transport.

What are some common seasonal options in the summer?

Summer offers lots of great options for seasonal foods, including:

Fruits like apples, bananas, cherries and strawberries are also in season during the summer.

Many foods that are in season during the summer are great for grilling. Here are a few recipes you can try that use in-season produce.

Zucchini is a variety of summer squash and part of the gourd family. It contains several important vitamins and minerals, including vitamin A and C, folate and potassium. Grilling zucchini is an easy way to get these health benefits, plus it doesn't take a lot to make it taste great!

To get the perfect grilled zucchini, make sure you cut it into uniform strips so that it grills evenly. Season your zucchini with extra virgin olive oil, salt, pepper and Italian seasonings before tossing it on a medium-high grill (400 to 450 degrees Fahrenheit). Cook on both sides for two to three minutes. You can enjoy grilled zucchini on its own as a main dish, or as a side with chicken, pork or fish.

Eggplant is a member of the nightshade family, along with bell peppers, potatoes and tomatoes. Similar to zucchini, it is high in vitamin A and potassium, and has just 25 calories per serving.

To grill eggplant, cut it into rounds or slices. Sprinkle with salt and let sit for 15 minutes; then pat dry with a paper towel to remove excess moisture. Toss the eggplant with a garlic and herb oil, and throw it on the grill on medium-high heat until the slices are tender and slightly charred (about two to three minutes per side).

For Mediterranean-style eggplant, top with feta, parsley and lemon juice, and pair with a tahini dressing.

At just 16 calories per cup, cucumbers are high in vitamin K, vitamin C, magnesium, manganese and potassium. Like zucchinis and eggplant, cucumbers don't need a lot of prep work before being put on the grill. Cut the cucumbers into spears and toss with enough oil to coat the outside. Add a pinch of salt and grill over medium heat for two to three minutes on both sides until they have a little char. Eat them just the way they come off the grill, or cut them up and add them to a salad.

Try mixing your cucumber with mint, almonds and feta cheese, and make a simple dressing of olive oil and lemon juice.

If you just prefer to have a protein as your main dish, it's easy to grill chicken or fish after you've seasoned it to your liking. After preheating the grill on high for 10 to 15 minutes, grill medium to large chicken breasts over medium heat for about 10 minutes, until the internal temperature reaches 165 degrees Fahrenheit, turning them at the halfway point. For fish, grill for eight to 10 minutes after bringing the fish up to room temperature. Pork chops should be grilled for about four to six minutes per side. Fish and pork should both be cooked until the internal temperature reaches 145 degrees Fahrenheit.

Let your protein rest for three to five minutes before serving it. This allows the fibers of the meat to reabsorb the juices, which helps to keep the meat tender. Pair with in-season produce such as watermelon, corn or a salad topped with tomatoes and cucumber.

As you prepare for grilling season, it's important to keep safety in mind. Make sure you clean the surface of your grill before cooking. If you've used a wire brush, check the grill carefully, as the bristles can dislodge from the brush and get stuck in food. Be sure to avoid cross-contamination by using clean utensils to handle meat, and consider using a meat thermometer to ensure that meat is cooked to a hot enough temperature to kill germs.

Grilling in-season produce ensures you're eating meals that are at the height of their flavor and nutritional value. It's also a great way to put a twist on foods that you might otherwise prepare using other methods, such as roasting or sautéing. Once you've tried some of these grilled recipes, you may find yourself wishing for summer year-round!

June 28, 2022 by Emily Paulsen
Sunlight contains ultraviolet (UV) rays that can pass through the outer layers of the skin and cause damage.
Previous Post
HCA Midwest Health

June 6, 2022 by Tayla Holman
COVID: Understanding vaccine immunity and antibodies: This article will answer common questions that arise surrounding the immunity that results...
Next Post
Back to blog home

Using an air purifier for allergies, asthma and other health concerns

Are dogs good for mental health?

What are the warning signs of a stroke?

How to support someone with an eating disorder