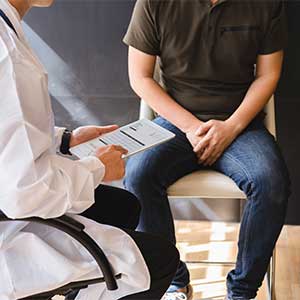 Sorry guys, the verdict is in. Most men need to pay better attention to their health, according to the National Institutes of Health. Compared to the ladies, men are more likely to drink alcohol, smoke, engage in risky or unhealthy behavior and... put off your regular checkups and medical care. Putting off check-ups is never good, but staying up-to-date is especially important when it comes to early detection of cancers.

According to the American Cancer Society, one in three men will develop cancer in his lifetime and one in five will die from it. Prevention and early detection remain our best defense against cancer. With most cancers, the earlier cancer is caught, the better the odds of survival.

For 2018, the American Cancer Society estimates that more than 850,000 new cancer cases will crop up among American men. The top five:

Here’s the good news: Screenings for four of them – prostate, lung, colorectal and melanoma – can potentially detect cancer early when the chances of cure are the best.

We hear a lot about prostate cancer because it’s the most common cancer among men and the second leading cause of cancer deaths. The biggest risk factor is age. Most prostate cancers are found in men over 65. Race plays a role as well, with African American men developing prostate cancer more frequently than any other race. Your risk is also increased if you have a close relative such as dad or brother, who has had it.

Prostate cancer may not initially have symptoms. As it progresses, signs can include:

Prostate cancer screening is done through a blood test called a PSA, which measures a prostate-secreting enzyme level in your blood. If elevated, it can indicate prostate cancer. There has been conflicting research about PSA screenings, which can be confusing. Dr. Van Veldhuizen recommends talking with your doctor about screening beginning at age 50 unless you have risk factors which would warrant earlier screening.

At least 8 out of 10 lung cancer deaths are attributed to smoking. The second most common cancer in men, and leading cause of cancer deaths, it is one of the few cancers that can frequently be prevented by not smoking.

Early-stage lung cancer frequently doesn’t have any symptoms. Later symptoms can include:

For the past five years, low-dose Computed Tomography (CT) has proven to be an effective screening tool for current and former smokers who have no symptoms of lung cancer. Your doctor can help you decide if you’re a good candidate for the screening.

Okay, let’s be honest. The prep for a colonoscopy is not exactly something you look forward too. But the benefits – detecting colorectal cancer at an early stage when it’s most treatable – are clear. Colon cancer almost always starts with polyps which can be removed before they turn into cancer.

Early-stage colorectal cancer may not have any symptoms. Symptoms to which you always need to pay attention are changes in bowel habits, rectal bleeding, belly pain, and weight loss.

Nothing says Happy 45th birthday like a colonoscopy. Forty-five is when you should be screened – or earlier if your doctor recommends it – then repeated every 10 years if results are normal. Learn about other colon cancer screenings.

Bladder cancer is the fourth most common cancer in men, with the chances of developing it increasing as you age. The biggest risk factor you can avoid? Smoking. Smokers are at least three times as likely to get bladder cancer as nonsmokers, according to the American Cancer Society.

Symptoms of bladder cancer include:

There are no screening recommendations for bladder cancers, so it’s important to tell your doctor if you are a smoker, former smoker or have any symptoms.

There are many kinds of skin cancer, with melanoma being the Big One. You can limit your risk by protecting your skin from the sun and other Ultraviolet ray sources.

You should look out for moles that grow larger, have an irregular border or change color.

Regular self-skin exams – looking at all your freckles, moles and other spots– along with a yearly examination by a dermatologist can help you detect early skin cancers. Tell your dermatologist about any changes in moles or spots. When melanoma is detected before it spreads, it has a high cure rate.

Yes, Men Can Get Breast Cancer

Although uncommon, men can get breast cancer too. The chances of developing breast cancer increase with age and men with a close female relative with breast cancer have a higher risk. Other risk factors include enlarged breasts from hormone therapy, a history of radiation exposure on the chest and taking estrogen.

Symptoms of breast cancer in men are the same as in women, with most cases being diagnosed when a breast lump is felt. Any changes in your breast tissue should be discussed with your doctor.

Although less common than some others, testicular and penile cancer also need to be caught and treated early for the best success, says Dr. Van Veldhuizen. “I’ve seen cases where men were embarrassed to see a doctor or were worried about their privacy. Any change, such as a testicular lump or swollen testicle, should always be checked.”

You can reduce your risk

The doctors and support team at the Sarah Cannon Cancer Institute at HCA Midwest Health have experience and expertise in all kinds of cancers, including those that impact men most often. Our physicians are board certified in medical oncology, radiation oncology and specialties such as genitourinary oncology and surgery. Recognized as leaders in cancer care, we use the latest research and technology to provide you with the best treatment for the best possible outcome.

January 22, 2019
If you have diabetes, planning meals may seem at times like a walking on a tightrope. We’re here to make it easier for you.
Next Post
Back to blog home

What can you do to relieve neuropathy symptoms?

The power of clinical trials

7 reasons to get a mammogram