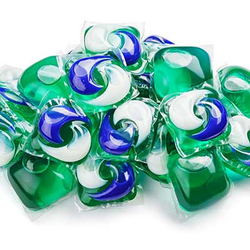 Prompted by internet dares, dozens of U.S. teenagers in recent weeks have popped liquid laundry detergent packets from a variety of manufacturers into their mouths just to see what happens, according to the American Association of Poison Control Centers (AAPCC).

There have been 39 reported cases of teens intentionally ingesting laundry pods during the first 15 days of 2018, poison control center statistics show.

That's exactly as many cases reported for the entire year of 2016, and nearly three-quarters of the 53 intentional misuse cases reported to poison control in 2017, the AAPCC reported.

The plastic skins of laundry pods are designed to dissolve on contact with water and automatically release the pods' contents. That means when kids pop a pod in their mouths, they're also getting a dose of chemical cleansers.

Ingesting a detergent pod could potentially cause devastating long-term effects. If the detergent burns the esophagus, resulting in scarring, it narrows the passageway making it easier for food to get stuck.

At the very least, kids who stick a pod in their mouth will cough, gag and foam at the mouth. At worst, they could experience diarrhea and vomiting, chemical burns to their throat and airways, severe breathing problems, seizures and even a coma.

When laundry pods first hit the market several years ago, experts were particularly concerned about young children trying to eat them. The pods are very colorful and look like candy.

Indeed, children aged 5 and under were most affected by intentional and unintentional exposure to single-load liquid laundry packets in 2017, accounting for 10,583 of the total 12,299 cases reported to the nation's poison control centers.

If you have questions or concerns about the misuse or ingestion of a laundry packet, call the national poison help hotline immediately at 1-800-222-1222 for guidance. You can also text POISON to 797979 to save the number in your phone.

Don't wait to call poison control if you detect any difficulty breathing, loss of consciousness, foaming at the mouth or drooling, or seizures. Call 911 immediately.

Learn more about our dedicated pediatric ER and find a pediatric specialist here.

Why are teens doing this?

Should I take these laundry packets out of my home?

What happens when someone swallows a laundry packet?

What should I do if I know someone has swallowed a laundry packet?

Can you prevent diabetes?

What you should know about fever in children

January 24, 2018 by Dr. A. Gabriel Schifman, Medical Director, Pediatric ER at Overland Park Regional Medical Center
All kids get a fever from time to time, and most fevers usually don't indicate anything serious. Fever itself causes no harm and can actually...
Next Post
Back to blog home

The air that you breathe… is it harming you?

How to stay safe on a snow day

Newborns and coronavirus: Helpful ways to protect their health