Are dogs good for mental health? 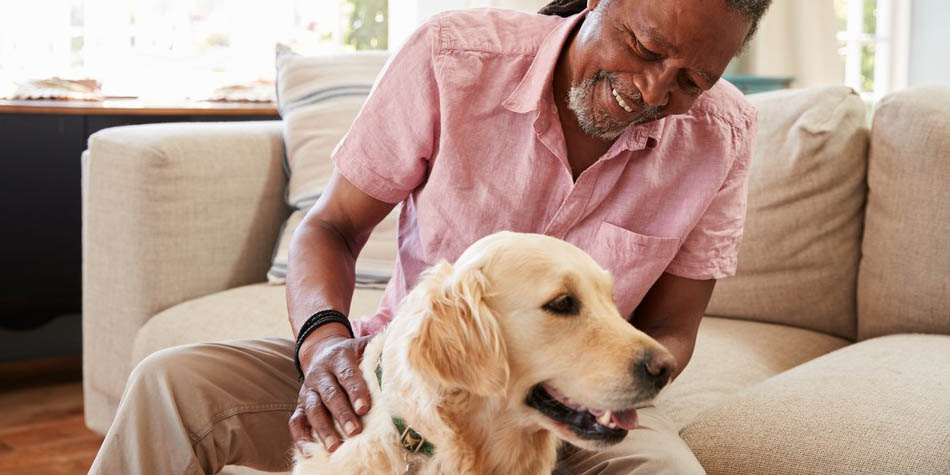 Dogs can provide companionship, promote exercise and allow people to feel needed — all of which can improve mental health.

If you're wondering whether dogs are good for mental health, let's set the record straight — yes, they absolutely are. And if you're lucky enough to love a canine friend of your own, you know it to be true. But science suggests there are some caveats. While dogs can indeed provide mood boosters, they're also a big responsibility.

For years, researchers have been exploring this topic to nail down exactly why people with pets report being more satisfied with life, even if they're not necessarily happier. Roughly 7 in 10 American households report having a furry friend, which is a lot of good feeling to go around, even with the effort that caretaking requires. So what's driving this?

As it turns out, there may be a few contributing factors. According to health experts, there are various aspects of dog interactions and ownership that connect back to mental health. Here's how having a dog can impact your overall wellness too.

Dogs need exercise, and people do too. When you commit to the responsibility of dog ownership, you're in for a lot more walks around the block than you might take otherwise — about 22 minutes more per day, according to a study in BMC Public Health. All of that physical activity stands to generate more endorphins, known as the brain's "feel-good chemicals," and that's on top of the other feel-good chemicals that dog play brings, such as oxytocin and dopamine.

Staying active doesn't just help to manage stress, improve sleep and boost your mood; it's also a key part of an overall healthy lifestyle. Aerobic activity supports good heart health, which can, in turn, protect against mental health concerns like depression. Evidence also shows a cyclical effect between the two, as a healthy body supports a healthy mind, and vice versa.

For their part, dog owners have an advantage here: They have a lower risk of hypertension and heart disease, which are two conditions that can contribute to poor mental health.

Dogs and humans may not speak the same language, but our bonds are no less powerful. In studies, many folks have reported that their canine companions help them feel less lonely, both in the short- and long-term. Many programs that bring therapy dogs into hospital rooms and nursing homes are a testament to that.

This effect was especially critical during the early stages of the COVID-19 pandemic, when the world found itself more lonely due to social distancing. It may also be why, at least in part, dog adoptions temporarily surged 250% from 2019 to 2020.

Feeling needed by someone else

There's a lot to be said for taking care of someone who needs you, and there's no shortage of that when you're caring for a dog. Science has demonstrated a link between that kind of responsibility and positive mental health effects, including high self-esteem.

But it's not just a feeling of self-worth that dog ownership, and all of the responsibilities that come with it, can provide. Taking care of a pet might encourage you to take better care of yourself, too. One study found that when teenagers with diabetes cared for a pet fish, they more diligently checked their blood glucose than teens without that responsibility.

After all, dogs need you to be around for them, and that's a pretty big motivator to put in effort.

The caveats of dog companionship

While there are known health benefits of pet ownership, it's not always a walk in the park. Regular caretaking is a big and costly responsibility, and the around-the-clock nature of caretaking can come with its own stressors, too. In combination, these factors might not add up to increased happiness.

Pet companionship has been associated with reductions in stress, depression and anxiety, and it can give people joy and greater meaning in life. However, many studies have found that pet owners aren't necessarily happier, per se. Interestingly enough, the same phenomenon has been found with childrearing.

So do dogs make us happier? They certainly can, but they might not in all cases. Are dogs good for mental health in general? Unequivocally, yes.

June 28, 2022 by Tayla Holman
Sarcoma is a rare type of cancer that arises in the musculoskeletal system.
Next Post
Back to blog home

Recipes for an upset stomach: When you need relief from rich holiday meals

Your child has a concussion. Now what?

How to support someone with an eating disorder

How to combat depression during the holidays