It was Memorial Day when Jeff Morgan was doing a cardio row/bike workout with his niece, Alex and her husband, Mike, starting with a one-half-mile run and continuing with a strength workout, part of The Murph Challenge (annual national fundraiser of the LT. Michael P. Murphy Memorial Scholarship Foundation,

During the third round of strength work Morgan indicated to his workout partners that he needed to “rest a bit.”

“Mike and I kept checking on Jeff and I went in the house to get him a recovery drink,” Alex says, “and when I returned, Mike and our neighbor, Marco, were trying to talk to Jeff, who was losing consciousness.”

Marco called 9-1-1 and as her uncle’s breathing became more labored, Alex laid Morgan gently on the concrete, put an ice pack on his neck and checked his pulse, recalling, “It was faint, then non-existent. I immediately started chest compressions, and Marco informed the dispatcher, who was still on the phone, counting out our beat for compressions. I felt Uncle Jeff’s heart start pumping and Mike took over compressions once I was unable to efficiently complete the necessary movement. Time was standing still.”

When EMS arrived on the scene, they used an AED to give Morgan two defibrillation shocks and once he was stabilized, transported him to the Overland Park Regional Medical Center Level II Trauma Center. The trauma team jumped into action and Morgan was rushed into the Cath Lab where George Pierson, M.D., a board-certified, fellowship-trained interventional cardiologist, ordered tests, discovering that Morgan had a heart attack.

Morgan’s wife recalls the conversation with Dr. Pierson: “He found no blockage or damage, but in his extensive training and experience, had never seen this type of case or outcome, especially during asymptomatic, sudden cardiac arrest. He inserted an ICD (implantable cardioverter defibrillator) in Jeff and, following observation, discharged him to go home with no restrictions or rehab. The pacemaker gives us tremendous peace of mind.” 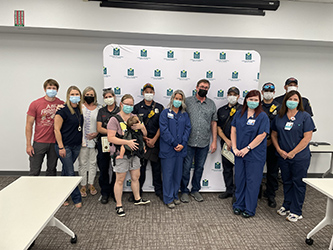 Morgan admits that he is still processing his encounter with death on Memorial Day.

“It’s emotionally hard, even after a month-and-a-half,” he says. “We’re taking an opportunity to raise awareness of the importance of CPR every chance we get—people need to ask themselves, ‘What would I do if this happened in front of me?’ Alex was proactive and she and Mike didn’t stop working on me until EMS arrived.”

“Alex knew how serious it was, based on what her uncle, her hero, looked like. She knew it was life or death,” Kelly says. “Jeff was turning blue, his eyes were wide open, he was foaming at the mouth. The whole experience is surreal and it’s difficult to describe what happened—the entire team was phenomenal, from EMS to the team at the hospital—ER to ICU and the Cath lab and Tele unit. They truly cared like family, with so much love and compassion.”

“I am unbelievably thankful that my CPR training kicked in, that my husband Mike and neighbor Marco were there,” says Alex, who is in the dental profession. “The greatest gift is having Uncle Jeff back to his full capacity.  His love of life and family, of helping others, it’s unparalleled.  The world is better with him in it.  I am grateful that I could help when it mattered most. I’ve probably spent 18 hours of CPR training and recertification over the years—it used to seem like such a mundane task, and I never thought I’d need it. But having gone through this experience with Uncle Jeff, to help save someone’s life—it’s priceless.”