This is the first Great Saves event the hospital has hosted since the pandemic.

“Our Great Saves celebrates the heroes who work every day to save a life, before patients even arrive at the hospital,” says Centerpoint Medical Center Chief Executive Officer Bret Kolman. “Patients, families, parents, caregivers and the frontline heroes are reunited during these powerful celebrations, which provide a sense of healing and offer a large measure of gratitude.”

“Our trauma team and emergency room staff have the honor of working with some of the region’s best first responders who represent the most skilled professionals and compassionate hearts in healthcare,” says HCA Midwest Health EMS Relations Director Tina York. “Their work in helping save patients’ lives, when minutes and seconds often mean the difference between life and death, is nothing short of a miracle.” 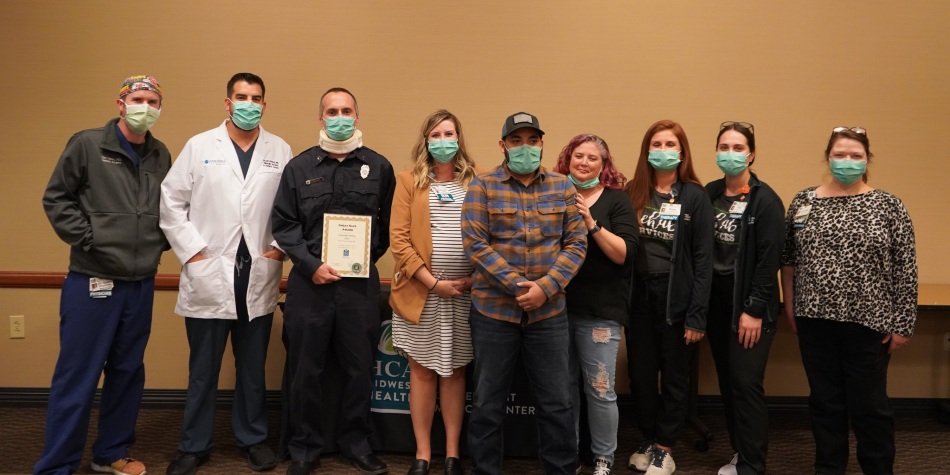 Hunter, who was wearing a helmet, was driving his motorcycle when an accident occurred, and he was ejected about 15 feet. Shaan Akhtar, MD, a trauma surgeon, approached the accident while driving from another facility on the way to Centerpoint Medical Center and assisted EMS, already on the scene. Hunter was put in an ambulance by Kansas City Fire Department paramedics and started on IV fluids. Dr. Akhtar called Centerpoint Medical Center, alerting the trauma team that a Level 1 trauma was enroute. Emergency department physician Alexander Cunningham, DO, met EMS and Hunter in the trauma bay. He was quickly assessed and taken directly to the OR, diagnosed with multiple fractures and traumatic hemorrhagic shock. He underwent multiple surgeries for abdominal, rectal, and orthopedic injuries and completed physical and occupational therapy. Hunter was discharged from Centerpoint Medical Center on June 29, 2022, and today walks independently. 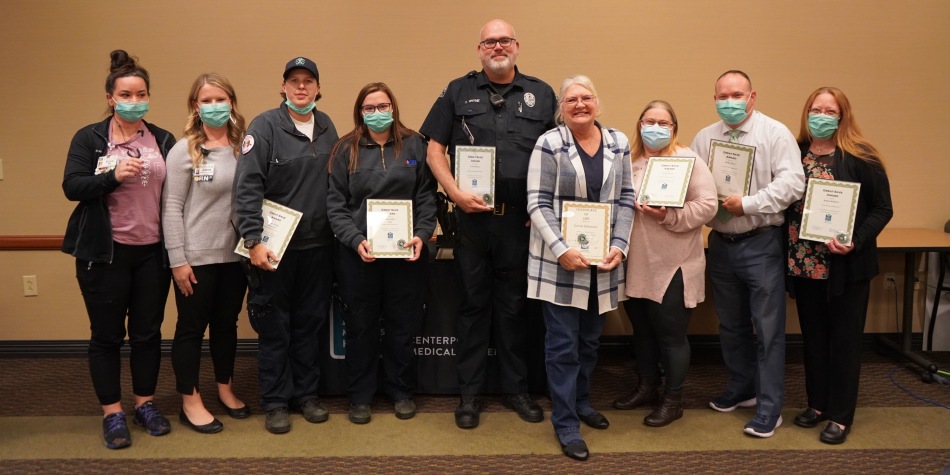 Just like any other day, Connie went to her job as a cashier in nutrition services at Van Horn High School. She had returned from break with a colleague to prepare for lunch. Connie's coworker, Tracy, noticed she wasn't responding normally to conversation around her. Connie told Tracy she couldn't see out of her left eye as other symptoms quickly developed. 9-1-1 was called and within 10 minutes of arriving, EMS assessed the situation and notified Centerpoint Medical Center of an incoming “Code Stroke” and transported Connie by ambulance to the hospital. Fifteen minutes later Connie arrived and was assessed; because she had arrived at Centerpoint within the required four hours of first noticing symptoms, she was determined to be a candidate for Tenecteplase, a clot-busting medication. The national time-to-treatment goal is to administer his drug within 60 minutes of hospital arrival; however, Connie received the drug within only 20 minutes of her arrival to Centerpoint Medical Center. Within 30 minutes of receiving the drug, Connie's symptoms resolved, and she was admitted overnight for further testing, consultation with physicians, and observation. The following day she was discharged to go home without any deficits, thanks to early recognition of symptoms and actions taken by Connie's friends, coworkers, emergency services team, hospital nurses and physicians. 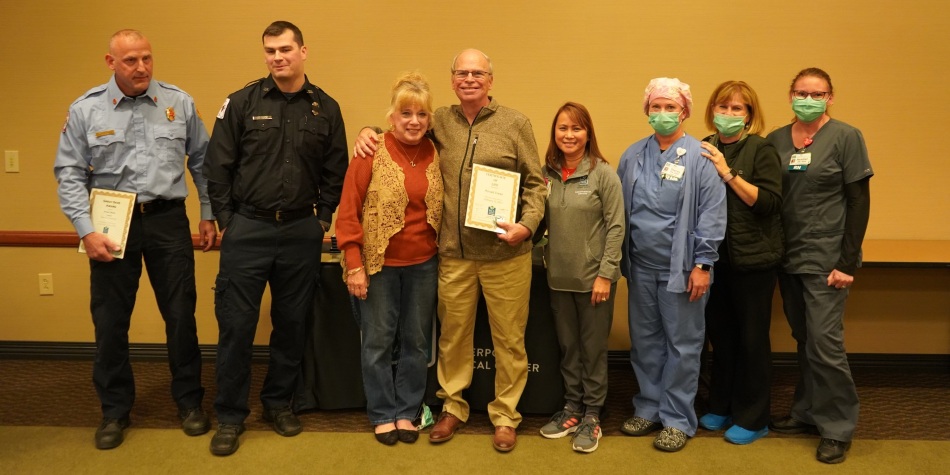 Ronald's wife found him unconscious in their living room, with audible gurgling sounds, and called 9-1-1. The Independence Fire Department arrived, finding the patient pulseless, started CPR, initiated an IV, and defibrated Ronald. When EMS arrived, they delivered shocks to regulate Ronald's heart heartbeat and CPR continued. He was transported by ambulance to Centerpoint Medical Center and stabilized in the ICU. Ronald suffered a heart attack with a completely blocked coronary artery. He recovered well and has since graduated from Centerpoint Medical Center's outpatient comprehensive rehab program. He and his wife recently took a celebratory vacation to Hawaii.