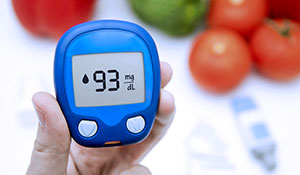 Diabetes can affect more than just your physical health. It can impact your lifestyle, emotions, relationships and finances. But you are not alone when it comes to managing diabetes. At HCA Midwest Health, we offer comprehensive care and the latest treatments for people at risk or who have diabetes. We want to empower you to take control of your risk factors and manage your health. With the right care team you can take charge of your diabetes and lead a full and active life.

We offer prevention and care for:

The pancreas is a large gland located behind your stomach. Beta cells in the pancreas make a hormone called insulin. The beta cells release a certain amount of insulin at certain times in order to regulate your blood sugar. Insulin moves sugar from you blood to your cells where it is needed for energy.

Another hormone, glucagon, is responsible for telling the liver when to release stored sugar. This is needed when your blood sugar gets too low.

If you have diabetes, your beta cells may not be functioning properly. Overtime, the beta cells decrease and the pancreas makes less and less insulin. In type 1 diabetes patients this process happens suddenly as opposed to overtime.

If you have type 2 diabetes, there also may be other issues including:

If you have been diagnosed with type 2 diabetes, you should see your primary care physician several times a year to help manage the disease. Your doctor should review your medical history and conduct a physical exam two to three times per year. These check-ups will include nutrition, physical activity, management of diabetes and cardiovascular risk factors (such as weight) and related complications. They will also take your blood pressure and look at your feet. In addition, the following exams should be completed annually:

HCA Midwest Health offers a diabetes education program at Menorah Medical Center. The program is recognized by the American Diabetes Association and provides comprehensive education including:

It’s a sobering statistic: Heart disease is the leading cause of death in the United States. But if you’re diabetic, your risk for heart disease about four time higher. And what’s more unsettling is that 42% of diabetics also have heart disease and they often don’t know they have it.

If you’ve had diabetes, especially if you have had it for a while, you should be screened for heart disease. Because of newer treatments, it is now possible to give people back years of their life. There are medications that lower glucose and can reduce your chance of a heart attack, stroke or death.

Learn more about the link between diabetes and heart disease and what you can do to slow its progression.

Our pediatric endocrinologist, Larry K Midyett, MD sees children at Overland Park Regional Medical Center in Overland Park, Mo. Dr. Midyette and him multidisciplinary team of specialists will partner with you and your child to manage their diabetes so they can live a healthy and active life.

Diabetesforecast.org (Everything you need to know about Blood Glucose Meters)

Healthcare Takes a Turn for the Better . We’re always looking for ways to improve healthcare, by making sure your health questions are answered and you know about the services and support available to you. Submit a question of your own and get answers from the medical experts of HCA Midwest Health.

Do I Have Diabetes?

Type 2 diabetes doesn’t travel alone. This common disease can wreak havoc on your eye, kidney, nerve and heart health. But the good news is, it can be prevented.... Read blog post

The Link Between Diabetes & Heart Disease