Smoking, diabetes may be especially risky for women's hearts 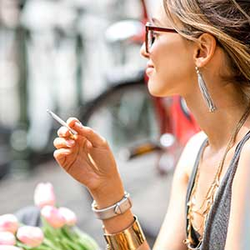 Looking at data on 472,000 Britons ages 40 to 69, researchers found that all three of these heart disease risk factors increased the odds of heart attack for both sexes.

But the rise in risk went even higher for women than men.

One risk factor – overweight or obesity – was associated with similar increases in heart attack risk in women and men, the researchers reported in The BMJ.

"Overall, more men experience heart attacks than women," Millett, an epidemiologist at Oxford's George Institute for Global Health, said in a university news release. "However, several major risk factors increase the risk in women more than they increase the risk in men, so women with these factors experience a relative disadvantage."

"These findings highlight the importance of raising awareness around the risk of heart attack women face, and ensuring that women as well as men have access to guideline-based treatments for diabetes and high blood pressure, and to resources to help them stop smoking," she said.

The findings reinforce that heart disease is certainly not a "males-only" disease.

“Cardiovascular disease is the leading cause of death among women in the United States,” said Dr. James T. Christmas, an obstetrician/gynecologist with Commonwealth Perinatal Associates in Richmond, Virginia, and HCA’s national medical director of Women’s and Obstetric Services. “Although estrogen levels during the reproductive years provide some protection to younger women, cardiovascular disease may present differently in women and has a higher mortality rate that in men.”

“Many of the risk factors for heart disease in women are similar to those in men: family history of cardiovascular disease, abnormal lipid profile, diabetes, high blood pressure, obesity, lack of exercise, and smoking. In addition, many of these risk factors have a greater impact on the risk of complications in women than in men,” he noted. “Women who have had pregnancies complicated by pregnancy induced hypertension or gestational diabetes have and increased risk of developing cardiovascular disease later in life. Likewise, women with a history of polycystic ovary syndrome are at increased risk of developing cardiovascular disease.”

Why are my hands shaking?

March 22, 2018
When your body suddenly develops symptoms such as tremors (shaking hands), it can be scary. However, it doesn't always mean a serious disease...
Previous Post

March 17, 2018
Up to 1 in 4 women may have issues with menstruation without significant pain or cramping. But these menstrual flow problems often need treatment...
Next Post
Back to blog home