What is Inflammatory Bowel Disease (IBD)? 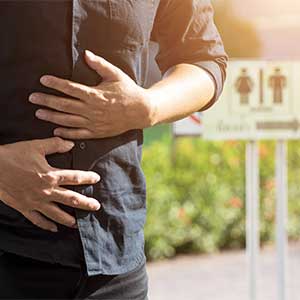 The possibility of having a condition like Inflammatory Bowel Disease (IBD) can be daunting. IBD shares some similarities with Irritable Bowel Syndrome (IBS), a more common bowel disorder. IBS symptoms include cramps, bloating, gas, diarrhea, constipation and mucus in the bowels. Both are painful and distressing to patients. However, a major difference is that IBS is less serious, and is considered a functional disorder. IBS does not cause inflammation, require hospitalization and carries no risk of surgery to treat affected areas.

According to the Centers for Disease Control and Prevention, about 3 million adults in the United States suffer from IBD. “Inflammatory Bowel Disease can cause pain, discomfort and even embarrassment,” says Ben Mizrahi, MD, colorectal surgeon at Menorah Medical Center part of the HCA Midwest Health network. “It can also greatly impact a patient’s daily life, emotions and even cause financial stress.”

Despite these challenges, there are reasons to feel optimistic. “Research, scientific advances and increased awareness have made it possible for people with IBD to lead normal lives,” states Dr. Mizrahi. “There are various treatment options that can safely and effectively manage IBD symptoms allowing patients to continue their daily routines and enjoy an active lifestyle.”

For a wider support network outside of family and friends, there are organizations and foundations dedicated to helping patients connect with others who are going through similar experiences with IBD.

Inflammatory Bowel Disease (IBD) is a general term for conditions that cause chronic inflammation of the gastrointestinal (GI) tract. The two types of IBD are Crohn’s disease and ulcerative colitis (UC).

“Both Crohn’s and ulcerative colitis are responsible for causing inflammation of the GI tract. However, there are very distinct differences between the two,” says Dr. Mizrahi.

Their acronyms and symptoms are similar, but inflammatory bowel disease and irritable bowel syndrome are very different conditions.

Irritable bowel (IBS) is not a disease, but a syndrome — a grouping of symptoms that often appear together. IBS is much more common and does not involve inflammation. Instead, IBS involves how the bowels function, often leading to chronic diarrhea, constipation or alternating between the two. IBS does not damage the GI tract and rarely poses a serious health risk.

If not controlled, the inflammation caused by inflammatory bowel (IBD) can damage the affected areas of the gastrointestinal tract and cause problems with bowel function. IBD may lead to hospitalization, and require strong medications or surgery to manage.

There was a time that experts suspected diet and stress as the causes of IBD, but it has since been confirmed that these factors only aggravate symptoms.

“While the exact cause of IBD remains unknown, we now believe that it may involve some malfunction in the immune system,” says Dr. Mizrahi. “Environmental and genetic factors may also play a role.”

For people living with IBD, symptoms can vary in type and severity, and can even change or worsen over time. These can include:

When these symptoms appear, stool and blood testing is common. A combination of endoscopy and colonoscopy may also be used—along with contrast radiography (x-ray), magnetic resonance imaging (MRI), or computed tomography (CT Scan).

While there is no cure for IBD, there are treatments that may help manage symptoms. “People with IBD often go through periods of remission, where they experience little to no symptoms at all, says Dr. Mizrahi. “And then there are times when the disease is active and symptoms occur. These are called flare-ups.”

“Everyone experiences IBD differently so treatment is customized for each patient based on factors like the severity of the disease, response to previous IBD treatment(s) and other existing medical conditions,” states Dr. Mizrahi.

There are five main drugs used to treat IBD, all of which aim to achieve and maintain remission, and prevent flare-ups.

Antibiotics may be used to supplement these medications when infections occur. For example, in cases of perianal Crohn’s disease.

In some cases of inflammatory bowel disease, surgery may be recommended to remove the affected areas of the GI tract. For younger ulcerative colitis patients, a surgery called total proctocolectomy with J-pouch can be used to cure the disease.

If you are having pain or difficulty eating or digesting, blood in the stool, changes in bowel habits, and/or weight loss, contact your primary care physician or find a GI specialist.

The Link Between Diabetes & Heart Disease

Can You Prevent Diabetes?

January 29, 2018
Type 2 diabetes doesn't travel alone. This common disease can wreak havoc on your eye, kidney, nerve and heart health. But the good news is, ...
Next Post

What Is Fatty Liver Disease and How Is It Diagnosed?

Liver Disease is on the Rise – Why, and what can we do?

Can You Prevent Diabetes?

Acid reflux can cause some real heartache – what to do?

What Are the Symptoms of Pelvic Prolapse?