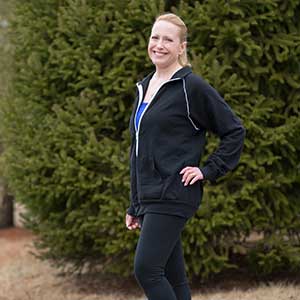 Wendy Mabrey is motivated by an exercise routine—the 55-year-old Lee’s Summit resident committed a long time ago to a life of good health, thanks to her father who taught the importance of physical fitness. However, her active lifestyle slowed down considerably in August 2017 when Mabrey’s nagging hip pain escalated.

“The pain in my left hip actually started in October 2016 and I thought I had strained something during a workout,” Mabrey says. “However, it came to the point last summer when I knew I wanted, and needed, my life back. In retrospect, I probably waited too long to find out the exact origin of the pain.”

When Mabrey consulted her primary care physician in February 2017, arthritis was discovered in her hip; she managed the discomfort with Tylenol. Still not satisfied with any measure of relief, she made an appointment with Dr. Matthew Daggett, D.O., a board-certified surgeon at Lee’s Summit Medical Center who repaired a torn meniscus in her right knee the prior year. Following an examination, he referred Mabrey to a clinic for steroid injections.

“The first shot provided some relief for eight weeks,” she says.  “The second one didn’t work so, in September, Dr. Daggett referred me to Dr. Timothy Roberts at Lee’s Summit Medical Center.”

“I felt confident with Dr. Roberts and decided to have the less-invasive anterior hip replacement surgery on October 2, 2017,” Mabrey says.  “I didn’t want to wait any longer, especially when advanced technology that would offer a quicker recovery was available and I had a surgeon and team I liked.”

Prior to surgery Mabrey attended a complimentary patient education class at Lee’s Summit Medical Center, along with other replacement surgery candidates, and received information about the procedure, precautions and what to expect before, during and after surgery and the hospital stay.

“It was a remarkable experience because I was with other people about to go through similar procedures,” she says.  “Although we all had some of the same questions, I received answers to some I didn’t even know I had. The workshop put me at ease.”

Post-surgery Mabrey was pleasantly surprised that the tenderness she felt from the incision was nothing compared to the pain she had lived with for more than a year.  Even more thrilling for Mabrey was that, once she left the hospital the day after surgery, she could accomplish most things by herself—caretaking duties were minimal. A prescribed physical therapy regimen helped her regain strength and function and Dr. Roberts discharged her in December 2017.

Now Mabrey is back on her treadmill and has resumed walking, with the goal to gradually build up to her pre-surgery routine.

“I recommend anyone who has hip pain to see a physician because you don’t have to live with it,” Mabrey says. “Don’t put it off—if surgery is in your future, have it done so recovery can begin and you can improve your quality of life.

What about the cane Mabrey stashed in her car trunk just in case she needed it while recovering from the anterior hip replacement surgery?

“It doesn’t get a workout anymore,” Mabrey laughs. “I’m the one getting the workout.”