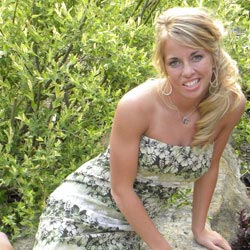 “I have not gone where I intended to go. But I ended up where God needed me to be.”

In time it would become one of Kendall Moore’s favorite quotes. But for now, she lies in a coma at Centerpoint Medical Center. She has a lacerated liver, a collapsed lung and severe head trauma. Her friend, Cole Steelman, is dead.

“I did not expect her to be alive when I got to the hospital,” said her grandmother, Lavonne Moore.

It was after 10 p.m. on June 10, 2011, when Kendall, Cole and another couple decided to leave the rural Lafayette County home where they were swimming and ride ATVs to a friend’s home about a mile away. Kendall went with Cole. The other couple followed closely behind but decided to stop after light rain turned into a downpour. Kendall and Cole had disappeared into the darkness.

No one knows what happened next. The Odessa teen was found unconscious in a ravine later that night by the couple and two friends who searched frantically for her and Cole after they failed to show up at their destination. The ATV was lying over Kendall. Cole’s body was nearby. Neither was wearing a helmet.

The Odessa Fire Department and EMS were the first on the scene and would later be credited with saving her life.

What had begun as a wonderful evening among friends had in a moment turned tragically wrong. It was not the evening anyone had planned. It is believed that weather and visibility contributed to the crash. Alcohol and drugs were not involved.

Kendall spent the next 13 days in a coma in the ICU at Centerpoint as family and friends prayed for her survival. Kendall’s parents, Kim and Randy, never left her side.

“They were with me at every rehab I was at,” she said.

After gaining consciousness, doctors were better able to begin assessing damage to her brain. She couldn’t stand. She didn’t speak. She had no sense of balance. Mentally she was confused and unsure. She was afraid to be alone.

Doctors say she suffered severe brain shearing, a traumatic injury where damage to the brain occurs over a widespread area. It is one of the most devastating brain injuries and one of the leading causes of death in people with traumatic brain injury.

After 3 weeks at Centerpoint, Kendall was taken by ambulance to Madonna Rehabilitation Hospital in Lincoln, Neb. There Kendall was re-taught how to talk, walk, run and other motor skills. She also was beginning to remember.

“Did Cole come to see me?” she asked.

Emotionally it was a difficult time for Kendall and her family. But among the daily struggles were moments of joy and hope. Like the day she first spoke after the accident. It was in Lincoln. She was hugging her sister, Sam, who was preparing to leave the hospital room.

“Sam, where are you going?” Kendall asked. It was a milestone. Kendall was getting better. She spent five weeks at Madonna before returning to Odessa.

“The last night there, it hit me,” Kendall said. “I cried and cried. Sometimes you need a good cry and this was one of those times.”

Kendall returned to Odessa in early August. She continued her rehab at the Kansas City Rehabilitation Institute. She took driving classes and underwent speech, physical and occupational therapy. She was regaining much of what she lost.

“It was frustrating,” Kendall said. “It’s like I knew that before, why don’t I know it now.”

Every day, her mother would tell her: “Trials are not enemies of faith but opportunities to prove God’s faithfulness.” It gave her strength and the courage to face her daily struggles. As did one of her favorite quotes” “I have not gone where I intended to go. But I ended up where God needed me to be.” Later in the fall, Kendal started work with a personal tutor. They studied state capitols, played Scrabble, Words with Friends and even relearned basic cooking measurements – like the number of teaspoons in a tablespoon.

“We feel very blessed that she was spared,” her grandmother said. “We had wonderful support from family, friends, the nursing staff, church community, everyone.” Today Kendall is doing well. She completed her spring semester at Longview Community College, where she was enrolled in the ABLE program which helps students with neurological disabilities such as brain injuries.

“If it wasn’t for the emergency people, I wouldn’t even be here today,” Kendall said. “They are my heroes.” The Odessa Fire Department and EMS were honored by Centerpoint recently during a “Great Save” Event for their heroic efforts in saving her life.

“Wear your helmet and wear your seatbelt,” she said.

For Kendall, the last year has been a journey of faith, hope and courage. Her recovery was remarkable. It was nothing short of a miracle.