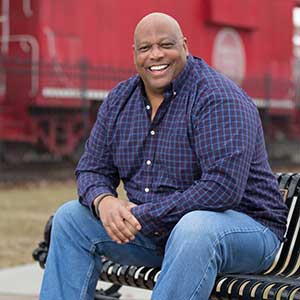 During a magical trip to Disney World in April 2015, Lee’s Summit resident Ernest Ferguson realized his knee woes were getting in the way of having a good time.

“My wife and I were having a ball , exploring the fourth park of our five-park Disney World vacation,” Ferguson, age 56, says. “But when one of the kids said ‘Papa, can you pick me up?’ and I bent down and was in excruciating pain, I knew the time had come for some serious decisions about my knee.”

Ferguson played football in high school and football and softball in the military. In 1981, during football practice, he ruptured his left patella, or kneecap. Years later, at age 45, he underwent arthroscopic surgery on his left knee; the surgeon recommended waiting until age 50 to consider knee replacement. Over the years the IT professional has managed the increasing discomfort in both knees with a regimen of naproxen and ice.

Following the Disney World incident that forced him to stay in the hotel room the next day, attending to his throbbing left knee by applying ice and missing a trip to the resort’s Animal Kingdom with the family, Ferguson resolved to consult with an orthopedic surgeon.

“Not being able to pick up my granddaughter convinced me I needed help beyond the naproxen and ice,” Ferguson laughs. “Holy smokes, just that simple act of bending down amplified the pain beyond measure.”

Gerald Dugan, M.D., a board certified orthopedic surgeon at Lee’s Summit Medical Center, suggested a series of injections, which helped Ferguson’s quality of life for about 18 months.

“The first injection lasted about nine months, the second one about six months and the third one about three,” Ferguson says. “Dr. Dugan and I decided it was time for surgery and I had my left knee replaced in January 2017.”

During the post-surgery, Ferguson noticed a remarkable improvement in his knee.

“Two days following my surgery at Lee’s Summit Medical Center, I was walking the halls and doing physical therapy twice a day and then, following discharge, it was in-home therapy and then outpatient,” Ferguson says. “My quality of life was fantastic—much better than I ever imagined.”

“Although the recovery was a bit different from what I experienced with the left knee, I’m thrilled with the results,” Ferguson says. “Dr. Dugan is the perfect match for me—very straightforward and transparent, a great surgeon and just a nice guy. Someone you want in your corner. And the entire staff at Lee’s Summit Medical Center is terrific, from lab work to pre- and post-op to the ortho nurse, Anna, who helped me during both hospital stays.”

Concentrating on physical therapy to totally rehab his right knee, Ferguson and his wife have big plans for the family during Christmas 2018.

“We’re taking everyone on a Disney cruise,” Ferguson says. “And this time, I’ll be able to enjoy everything with my grandkids without worrying about knee pain. Best gift ever.”