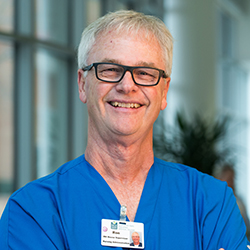 Ron Byrd, RN, never thought of himself as a pioneer. But in 1984 when he became one of Overland Park Regional Medical Center’s first male nurses, that’s just what he was.

“When I started nursing, you could probably count the number of males here in that role on one hand,” Byrd recalls laughing. “That has changed significantly.”

“There was a time when nursing was not considered a career for men at all,” says Byrd, who serves as a nursing house supervisor. “But our society has come a long way and we’ve knocked down those walls.”

“Having a diverse workforce is critical to the success of our nursing program,” adds Overland Park Regional Medical Center’s Chief Nursing Officer, Teresa Collins, RN, BSN. ”Every person brings a different perspective and experience to the job and that’s good for our team in general and it’s very good for our patients.”

Part of the driver for the influx of male nurses was the realization among jobseekers that nursing provided an opportunity—for men as well as women—to enter a clinical profession in a well-paying career that allows for mobility and job security.

Byrd was already enjoying a successful career in hospital materials management when he was approached about considering a career in patient care. He took some community college classes, became interested in emergency medical technician (EMT) work, and subsequently volunteered with Johnson County Ambulance Service. Byrd’s sister was a nurse and she, along with nursing leaders at various area hospitals, encouraged him to apply to nursing school. He did and was accepted to multiple schools. While attending school, Byrd continued to work and upon graduation joined the emergency department’s team, a nursing role for which he continues to maintain a strong passion. Even though he has been asked to lead teams—as house supervisor and ED director—Byrd has a bias for working directly with patients. He believes that men and women bring different but complementary talents to the critical patient role.

“There is a difference between the way men and women act and do things,” he says. “That mix of skills and styles is good for us as a profession. Whether you have muscle, or finesse, it’s really more about knowing your patients.”

Regardless of who is in the role, he says, keeping the patient front and center is the most important element of nursing.

“Respect for the patient has to be inherent,” Byrd said.