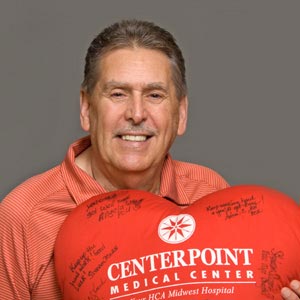 James Seeley considers himself one lucky man. The 66-year-old went to Centerpoint Medical Center’s Emergency Department on March 24, 2008 with excruciating pain.  He was immediately admitted for gallbladder surgery but during a routine exam prior to the procedure Joseph Evans, MD detected a heart murmur.  Dr. Evans brought in cardiologist David Akin, MD to consult on James’s case.

James was diagnosed with aortic stenosis, a narrowing or obstruction of the heart’s aortic value which prevents it from opening properly and blocks the flow of blood from the heart’s left lower chamber to the aorta.

A complicating factor was James’s Type II diabetes, a condition diagnosed in 1990.  Because the gallbladder surgery would be in close proximity to the pancreas, there was a question as to whether or not James would survive that surgery, let alone the aortic stenosis.  Following another test the doctors decided to proceed with the gallbladder surgery, informing James and his wife Janice fully of the danger he faced.

“They assured us that a heart surgery team was standing by if they needed to do the heart surgery while I was on the operating table for the gallstones,” says James.  “The doctors were very succinct about the risks, but also very comforting about their plan.”

James had the initial surgery to remove the gallstones the evening of March 24 and came through with flying colors.  He stayed at Centerpoint Medical Center for five days during which time he and Janice both agree the care was excellent.

“The staff was superlative,” says Janice.  “James’s daughter Terri traveled here from California and was very concerned about her dad’s welfare. Everyone assured her he was receiving the best care available.”

James was readmitted to Centerpoint on May 7 after completing a 45-day recovery from the gallbladder surgery.  Terry Gallion, MD, a thoracic surgeon with Midwest Cardiovascular and Thoracic Surgery, discussed heart valve treatment options with the Seeleys, explaining both in detail.  “We decided to go with the mechanical valve versus the tissue,” says James.  “I didn’t want to have the surgery performed again to replace it, and Janice and I felt this choice gave me the best chance of living a full life.”

The Seeleys agree that Dr. Gallion’s personal bedside manner gave them a world of confidence as James prepared for the heart surgery.  “When Dr. Gallion came out of surgery he told me it was a complete success,” says Janice.  “I was so relieved.  It was such an emotional time and I felt the doctor was right there with me on that rollercoaster.”

James and Janice recently packed their car for one of the most important trips of their lives:  to see two of their four grandchildren in Colorado, the first time since James’s health scare.  “Dr. Gallion told me I’m a lucky man to be alive,” says James.  “I know I am.  I’m blessed to share my life with my family and grandkids.”