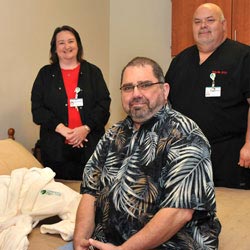 For nearly seven years, Joe Giangrosso was too tired to do much of anything despite spending 17 hours a day in bed.

“I had no interest in anything but sleep,” said the 55-year-old Independence resident. “I accomplished absolutely nothing for years.” Giangrosso was unable to work on a regular basis or enjoy the things he used to love. He was simply too tired.

“I’d sleep for 14 hours, wake up and get a bite to eat and go back to bed for another 3 or 4 hours,” he said. “I had no personal life. I was exhausted.” He was diagnosed as suffering from depression and treated with anti-depressants. When his condition didn’t improve, Giangrosso knew something else had to be wrong.

Giangrosso changed doctors and began undergoing a number of tests. The results gave no indication of what was causing the excessive tiredness. His doctor, Louis Orlando with Jackson County Medical Group, suggested he undergo a sleep study at Centerpoint Medical Center.

What they found was astonishing.

Giangrosso would stop breathing an average of 56 times an hour and his oxygen level would drop to a dangerously low 68 percent.

The number of breathing irregularities prompted technicians to wake Giangrosso during the study because he was showing signs of obstructive sleep apnea, a condition in which the airway collapses during sleep and momentarily prevents the person from breathing.

That same evening, Giangrosso was readied for CPAP, or Continuous Positive Airway Pressure, therapy. CPAP requires the patient to wear a nasal mask and headgear that holds it in place. The CPAP machine then pumps air through the mask, allowing the pressure to prop the airway open. Technicians adjust the flow of air until the apnea and related changes in breathing are reduced.

By morning, Giangrosso’s apnea events dropped to 8 an hour.

“When I woke up, I felt amazing. I felt like I could run 10 miles,” he said. Giangrosso did indeed have obstructive sleep apnea. It is a dangerous condition that puts extra strain on the heart and can lead to high-blood pressure, heart attack and stroke. Sleep study results are shared with the referring physician and, if necessary, used to calibrate a patient’s home apparatus.

Giangrosso underwent two follow-up sleep studies that resulted in change from a CPAP to a BiPAP apparatus. Unlike CPAP, BiPAP machines allow the air that is delivered through the mask to be set at one pressure for inhaling and another for exhaling. He uses his small, portable BiPAP machine each night. He also takes it with him when traveling.

Today, he is sleeping as well as he has in years. He is planning to have gastric bypass surgery later this year to improve his overall health and further lessen the number of apnea events.

“I never realized how dangerous sleep apnea is,” he said. “If I had not been diagnosed, I have no idea what would have happened.” Most people who have obstructive sleep apnea do not realize they suffer from the condition. Often, it is someone else who witnesses the first signs, such as snoring or excessive leg movements.

Giangrosso credits Steve Eller and Jennifer Edwards, both registered polysomnography technologists, for making him feel comfortable and educating him about the sleep study and dangers of apnea.

“They are so knowledgeable,’ he said. “They treat you like a friend and make you feel comfortable.” The sleep lab has comfortable amenities that closely resemble a home setting. Giangrosso compares it to a “3 or 4 Star Hotel.”

Centerpoint’s Sleep Disorders Lab is accredited by the American Academy of Sleep Medicine. Persons experiencing symptoms of a sleep disorder are encouraged to talk with their doctor.

Besides CPAP there are other options to treat sleep apnea, said Linda Lawson, supervisor of the Sleep Lab. Changing your sleep position, weight loss, surgery and oral appliances are also options to discuss with your doctor.