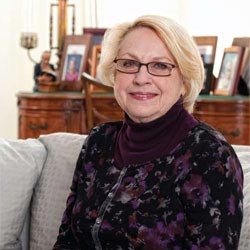 "The 71-year-old Overland Park resident was first diagnosed in 1981 with Stage IV synovial sarcoma; in 1995 she underwent a lumpectomy, radiation and nine months of chemotherapy for breast cancer; in 2000 a scan revealed spots on Krakow's left lung. She had the lower lobe of that lung removed and in 2003 spots showed up on her right lung; Krakow's surgeon cherry-picked those tumors. In 2005, 2008 and 2010 tumors ping-ponged between Krakow's lungs and each time she's had them removed by Bradley Koffman, MD, a radiation oncologist and medical director of the CyberKnife Center at Menorah Medical Center."