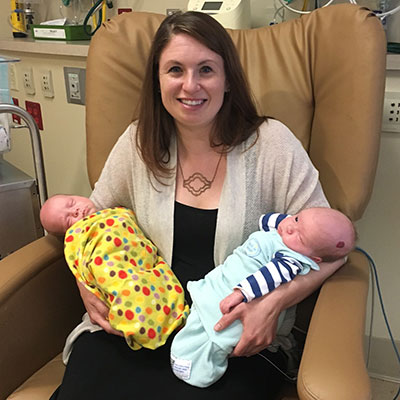 Sarah Hammontree was shocked to find out she was pregnant.

“I have a long history of surgeries to remove fibroid tumors from my uterus,” Hammontree said. “After my last surgery in 2016, I wasn't sure I even wanted to try to get pregnant. There was a moment of joy for sure but then it followed with terror.”

The second shockwave came during her first ultrasound.

“Then, I was told I was having twins,” Hammontree said.

Due to her previous medical history and her twin pregnancy, Hammontree’s OB/GYN Tim Martin, MD, The Women's Healthcare Group, referred her to the Maternal-Fetal Health Center at Overland Park Regional Medical Center.

Twin-to-twin transfusion syndrome (TTTS) is a condition where twins share a single placenta (monochorionic). As a result, one twin can have very little to no fluid around it (oligohydramnios) and the other twin can have too much fluid (polyhydramnios).

“I knew something was wrong when the ultrasound room started to fill up with people,” Hammontree said.  “My heart started pounding and I kept trying to tell myself to take deep breaths.”

“The risk for complications for mom and babies jumps dramatically when twins share the same placenta,” says Dr. Finley. “We were able to diagnose Sarah early in her pregnancy.”

The team of specialists at the Maternal Fetal Health Center began to work with Sarah to create a plan to take care of her health needs and bring her babies into the world as healthy as possible.

Hammontree and her husband met with Corey Iqbal, MD, Director of Pediatric and Fetal Surgery, at the Maternal-Fetal Health Center, and they discussed treatment options.

“Her TTTS was in stage I, if it were to progress to stage II the chances of the twins not surviving exceeds 90 percent.” Dr. Iqbal said. “Fortunately, Sarah stayed at a stage I and we continued to monitor her closely.”

But the fluid levels continued to drop for one baby and increase for the other.

“I felt so helpless, and I was helpless,” Hammontree said.

It was around 20 weeks, that the Maternal-Fetal Health Center team decided that Sarah undergo an amnioreduction.

“This is first line of action for TTTS,” Dr. Finley said.  “During this procedure, we drain fluid from one amniotic sac to give the other baby more room to produce fluid and relieve pressure on the placenta and uterus.  We were especially concerned in this case because the scars on Sarah’s uterus from her fibroid surgeries increased the chances of her uterus rupturing from all the pressure”

“What made this appointment much easier was knowing that I never had to leave this building,” Hammontree said. “I was wheeled up to the Antepartum Unit and they did the whole procedure in less than an hour.  All of my care team was under the same roof, so at some point during and after the amnioreduction, they all came to check on me.

If Hammontree’s TTTS would have progressed, Dr. Iqbal would have performed fetoscopic laser ablation.

“Laser ablation consists of inserting a fetoscope through a small incision in the mother’s uterus and a laser is used stop the blood flow between the two,” Iqbal said.

Hammontree suffered another setback. The day after the amnioreduction, she thought she was in early labor. Her husband rushed Hammontree back to Overland Park Regional Medical Center, where the Maternal-Fetal Health Center team discovered a large cyst on her ovaries had ruptured likely due to the difference in pressures from the amnio reduction.  She was monitored for several days on the hospital’s Antepartum Unit.

“The good news was that the amnioreduction was a success,” Hammontree said.  “My fluid levels were normalizing and that both babies were developing well.”

Vera and Iris were born at 34 weeks during a planned C-section because of Sarah’s history of fibroid removal.

“They were born healthy but being so premature they were taken to the Neonatal Intensive Care Unit (NICU),” Hammontee said.  “It was nice to be able to visit them during my recovery and it gave me piece of mind knowing that I could sleep there with my babies, at any point during their NICU stay.”

Vera and Iris spent about four weeks in NICU at Overland Park Regional Medical Center, which is led by Neonatologist Kathleen Weatherstone, MD.

“From start to finish, I never had to visit another office, building or clinic.  Every specialist that I needed to see or that my twins needed was all under one roof,” Hammontree said.  “I wish I had words to describe my gratitude better.  The whole experience from beginning to end is still so surreal to me.  I am very lucky and I am very, very thankful to the team of specialists at the Maternal-Fetal Health Center.”

“Our goal is to keep families together, and that is what we accomplished with Sarah, Iris and Vera,” Dr. Finley said. “New parents do not want to be separated from their newborn. This is why we have a comprehensive Maternal-Fetal Health Center at Overland Park Regional Medical Center.”