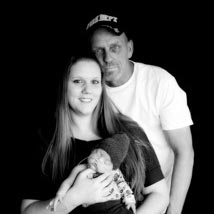 Sometimes another individual’s health challenges are nearly impossible to comprehend. But a family with three members in medical crisis calls for miraculous strength.

Consider Julie Clifton and her fiancé, Murphy Willingham. The couple lives in Quenemo in Osage County, Kansas. It was September 2011 and they were eagerly anticipating the birth of their first child. Busily preparing a nursery, attending baby showers, and shopping for diapers and bedding, Julie and Murphy looked forward to experiencing parenthood in the New Year. Julie, 25, was especially relishing the thought of being a first-time mother.

Suddenly, on October 5, 2011, the couple’s joyous world fell apart. Murphy, 45, went to the emergency department at Ransom Memorial in Ottawa following complaints of ailments including a headache and fever he couldn’t shake. He was admitted immediately, and after a week was transferred to a Topeka hospital. A week later Murphy was transported to a Kansas City hospital, and, following a battery of tests, doctors gave him a sobering diagnosis of acute myeloid leukemia (AML), and placed him on a donor list for a bone marrow transplant.

Meanwhile Julie, nearly six months pregnant, shuttled the 64 miles between Quenemo and Kansas City, keeping vigil at Murphy’s bedside. And then, on November 19, she succumbed to the enormous stress: her cervical wall collapsed. At 24 weeks in her pregnancy, Julie delivered Murphy Willingham, Jr. by caesarean section at Overland Park Regional Medical Center. He was immediately put into the care of the hospital’s Level IIIb NICU (neonatal intensive care unit).

Murphy, Sr. met his 1-pound, 9-ounce son by a webcam set up by the NICU nurses and physicians. Along with Julie, he learned that Murphy, Jr. had a heart murmur and respiratory issues and would later develop pneumonia and an infection.

“I was amazed that something so small could be so complete,” says Murphy, Sr. of his son’s perfectly formed hands, toes, feet and features.

Elaine Riordan, LMSW, is a 15-year veteran of Overland Park Regional Medical Center’s NICU and says that Julie and Murphy’s situation is a good example of the staff’s flexibility. “With Murphy, Sr. ill, receiving chemotherapy treatments and unable to be at his family’s side, we needed to be creative,” says Riordan. “It’s essential that we in the NICU provide as much support as possible to our families. The webcam was the perfect tool to allow Murphy, Sr. to virtually be with his son, even though he was unable to physically be here.”

Julie agrees that the experience she and Murphy, Sr. have had in the NICU hasn’t been one size fits all. “The nurses and physicians really take the time to be sensitive, and to provide the things that they would want if in our situation,” she says. “That means the world.”

Murphy, Sr. underwent a bone marrow transplant in December and in the midst of recovering, asked Julie to marry him on Christmas Eve. In keeping with the previous momentous occasion in their life, he popped the question long distance—he was in a Kansas City hospital bed and Julie was with Murphy, Jr. at Overland Park Regional Medical Center’s NICU.

Murphy, Sr. was released from the hospital on January 7, 2012, and one of his first stops before traveling back home to Quenemo was the NICU. He met Murphy, Jr. in person—his tiny son connected to machines, ensconced in an isolette. The proud father also met the nurses and physicians who took the newborn under their care and nurtured him to health.

Julie reflects on the events since last September and says gratitude comes to mind. “It’s been rough, I won’t deny that,” she says. “But we’ve had such an incredible support group to lift us up, including friends, family and the staff at Overland Park Regional Medical Center. Murphy, Jr. has been in good, good hands.”

The real miracle of the situation, she says, will be when the two Murphys—father and son—are finally united at home.

“When our family is together, outside a hospital setting, it will be a day of celebration,” says Julie quietly.