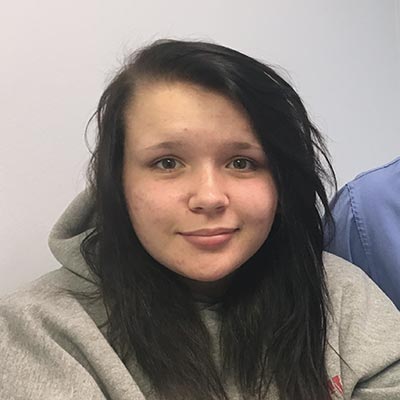 14 Minutes to a Brand New Cheyleah

“I couldn’t eat any of my favorite foods,” Town says. “I craved Chinese food and Starbucks, but both made me extremely sick.”

After visiting the Overland Park Regional Medical Center Pediatric ER, Cheyleah was diagnosed with biliary dyskinesia, which is commonly diagnosed in teens.

After visiting the Overland Park Regional Medical Center Pediatric ER, Cheyleah was diagnosed with biliary dyskinesia, which is commonly diagnosed in teens.

“This means her gallbladder is hyperactive and not properly functioning, which caused her pain and she needed surgery to remove it,” says Corey W. Iqbal, M.D., Director of Pediatric and Fetal Surgery at Overland Park Regional Medical Center.

Traditional surgery would have meant a large cut in the abdomen. Cheyleah and her family decided that pediatric robotic surgery would be their best option.

“With robotic surgery, very small incisions are made,” Dr. Iqbal says. “The movement of the robot’s arms is very close to the true motion of a human wrist, making things like sewing easier to achieve. Surgeons can see the surgical field in three dimensions, unlike with traditional laparoscopic surgery where there is no depth perception. With traditional gallbladder removal, a patient may be in the hospital three to five days after surgery. With robotic surgery, Cheyleah was able to go home that same day.”

Overland Park Regional Medical Center is one of just a few pediatric centers in the world and the first in the Kansas City region to perform pediatric robotic surgery with the top-of-the-line surgical robot, daVinci Surgical System.

A traditional gallbladder removal could take more than 30 minutes. Dr. Iqbal was able to remove Cheyleah’s gallbladder in 14 minutes.

“Single-incision surgeries are rare in pediatric patients, and many pediatric surgeons don’t use this technique because it is complex and requires advanced minimally invasive surgical skills and practice. We are a new pediatric center and by offering this service it shows our commitment to the advancement of pediatric services in the Kansas City region,” says Kevin J. Hicks, Chief Executive Officer of Overland Park Regional Medical Center.

“I feel so much better and I can eat my favorite foods again,” Chayleah said. “Even if I wasn’t the first pediatric patient to receive this surgery, it’s still made a huge difference.”