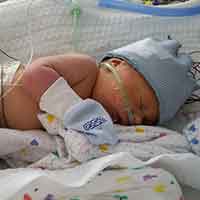 “Everything was going just as planned until I hit seven or eight centimeters,” she says. “The baby’s heart rate started to drop consistently and I was having trouble pushing.”

Stacey needed to have an emergency C-section. When Wyatt entered the world, he wasn’t breathing.

“His umbilical cord became pinched during delivery and he was without oxygen.” Robinson says. “He wasn’t breathing for his first two to three minutes of life.”

Wyatt was transferred to the Level IIIb Neonatal Intensive Care Unit at Overland Park Regional Medical Center and was diagnosed with Hypoxic-Ischemic Encephalopathy or HIE.

“HIE occurs when the brain does not receive enough oxygen at some point during birth,” says Thomas M. Lancaster, MD, Director of the Whole Body Cooling Program at Overland Park Regional Medical Center. “Whole body cooling is needed when an infant, like Wyatt, is born with symptoms of birth-related brain injury. Whole body cooling is effective in mitigating injury and preventing further brain damage in newborns.”

Whole body cooling entails using a specially designed “cooling blanket” on an infant and consists of lowering the newborns body temperature to 33.5 degrees Celsius (92.3 degrees F) for a period of 72 hours.

“Research shows that cooling babies deprived of oxygen at birth improves their chances of growing up without disabilities such as cerebral palsy,” says Dr. Lancaster.

“After he was admitted to the NICU at Overland Park Regional Medical Center, I was able to Skype with Wyatt,” Robinson said. “Even though I couldn’t be with him, the nurses let me talk to him and they comforted me as well.”

Robinson was able to hold Wyatt for the first time when he was finished with the whole body cooling treatment.

“Wyatt’s fourth day in the NICU, his doctor came in and said, ‘Today is a good day to hold your baby,’” Robinson said. “I was completely overwhelmed and scared but his care team was with me every step of the way.”

Robinson is grateful to the multidisciplinary team of neonatologists, neurologists, therapists and nurses to who provided care for Wyatt.

“When I entered the NICU for the first time, each member of the team hugged me and told me that we would get through this together,” Robinson says. “The support we received from his care team was amazing and they not only cared for Wyatt but cared for my husband and I too.”

After 11 days, Wyatt was able to join his parents and 4-year-old sister at home.

“We are so incredibly grateful to the awesome team of NICU doctors and nurses,” Robinson says. “We recently had our one-month follow up in the Overland Park Regional Medical Center NICU Follow Up Clinic and the doctors say Wyatt is doing excellent. I now know what Wyatt’s outcome could have been and for him to come home healthy and thriving, that is truly a miracle.”