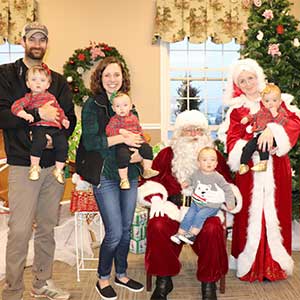 When Kaitlin Hartman was told that she was pregnant with triplets, her first reaction was to laugh.

“I was totally in shock,” she says. “We were overwhelmed, but we felt like it was a gift from God.”

Kaitlin and her husband, Josh, had just a week to process the thought of triplets when they got more news.

“It was actually four babies,” Kaitlin says. “One of the heartbeats had been hidden in the earlier ultrasound. We had to sort of ease ourselves into that news.”

For the Kaitlin, being pregnant was something of a miracle. Told as a young woman that she likely wouldn’t be able to have children, she and Josh turned to fertility treatments to try and have children. The joy the couple felt at finally conceiving was tempered with concerns about what it might mean for her health, the health of the babies and a host of other factors. The Hartmans soon faced an additional challenge—finding a doctor who felt comfortable with the high-risk pregnancy involving quadruplets.

“The first doctor we spoke with immediately talked about selective reduction, feeling that was the best option,” she says. “We couldn’t consider that. We kept looking for a doctor and then found Dr. (Tracy) Cowles, Dr. (Brent) Finley, and Dr. (Rabiya) Suleman at Overland Park Regional when I was about 12 weeks along.”

Finding the team of specialists at Midwest Maternal-Fetal Medicine and Overland Park Regional proved to be a turning point for the Hartmans. From the accessibility of their nurse navigator for questions at any time to the confidence and expertise of the specialists, the entire experience brought them a sense of comfort. Both Kaitlin and Josh were relieved to be in an environment with doctors and nurses who were positive about their situation.

“Everyone there let us know they would do everything they could to safely deliver all our babies,” Kaitlin says.

Doctors closely monitored Kaitlin on a bi-weekly, then weekly basis for much of her pregnancy. Then at 20 weeks, her ultrasound showed she was having contractions—far too early in the pregnancy to safely deliver the babies. The doctors quickly decided to admit Kaitlin to Overland Park Regional’s Maternal Fetal Health Center for 24/7 care and monitoring to extend her pregnancy as long as possible to give the babies more time to develop.

At 30 weeks, Dr. Cowles noticed in a check-up that Kaitlin’s face was puffy. Lab tests confirmed a risk of preeclampsia, a potentially life-threatening pregnancy complication. Time now of the essence, they delivered the Hartman babies a day later, Nov. 17, 2017.

All four babies were delivered within five minutes and were quickly taken to the hospital’s NICU. They all came out crying, an extremely positive sign. Teagan weighed 3 pounds, 1.9 ounces and was born first, followed by Braylon, the only boy, who weighed 2 pounds, 14.5 ounces. Ainsley, 2 pounds and 3 ounces, and Sadie was born at 2 pounds, 4 ounces.

All told, Kaitlin was in the hospital 67 days, and the babies were there for 109 days. Everyone came home safe and healthy—in the order in which they had been born.