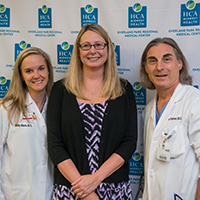 Amy Alexander's life changed forever when she was driving south on a highway near Louisburg, Kan., and another driver heading the wrong direction hit her head-on.

Alexander said she didn’t know how bad her injuries from the February 5, 2015, crash were until she reached Overland Park Regional Medical Center’s Level II Trauma Center.

But a CAT scan showed she had a torn aorta, an injury that could have killed her.

“Her chest CAT scan came up and I kind of got one of those wide-eyed, 'uh oh' moments because I immediately recognized there was a significant abnormality of her aorta,” said Don Fishman, M.D., trauma surgeon at Overland Park Regional Medical Center.

"I don't remember much of my time spent in ICU and that's okay," Alexander said. "The hardest part for me was being told I couldn't walk for at least three months. I've always been independent. When this happens, you feel trapped and 24 hours a day you have to rely on others for basic needs like getting dressed, showering, meals and going to the bathroom."

Her recovery has given her a new outlook on life.

"I still experience pain every day. However, I can stand here today and I am very thankful for all of the nurses and doctors at Overland Park Regional Medical Center,” Alexander says.