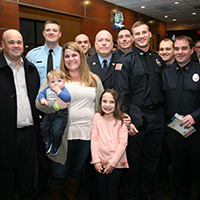 On August 13th, 2015, Savannah, her 7-year-old daughter Baylee, and 6-week-old son Bodee were traveling down 50 Highway westbound on their way to Hobby Lobby in Lee’s Summit. Savannah reports that an SUV pulled out in front of her crossing over from 50 Highway eastbound to turn onto Milton Thompson road. The SUV did not yield and even though Savannah slammed on her brakes, she was unable to stop in time and she and her children t-boned the SUV at 60 mph. The airbags in their truck deployed. Savannah and her children were all restrained with their seatbelts. The crews from Prairie Township and Lake Lotawana Fire Protection Districts were dispatched and responded to the scene.

The crew applied a c-collar on Savannah to secure her c-spine, placed her on a cot and moved her to the ambulance. Her assessment continued in route to Lee’s Summit Medical Center for a trauma evaluation.  Decision to activate the trauma team was made by the physician, Dr Hensen, based on the EMS report. The trauma team was awaiting Savannah's arrival. In quick fashion, Savannah was swept off to radiology for x-rays and CT scans. Even though her family was not at her bedside, initially, EMS and the Emergency Department staff reassured her that her family was being cared for. Savannah suffered minor injuries due in part to her diligence in driver safety by making sure everyone was secured with their seatbelts and in car seats and being cognizant of her surroundings. Due to the attentive work and assessment from Prairie Township and Lake Lotawana EMS crews to care for get Savannah and get her to a trauma center, Savannah is happy to be doing well and she and her family would like to thank the crews for the job they do every day to protect and care for the community.

“The biggest thing for me is how wonderful EMS crews were with my two kids. Baylee was very scared and it was hard for me not to be able to comfort her. The EMS crews went above in beyond in my opinion not only making sure that she was okay physically, but emotionally as well,” Bush said. “Not knowing how Bodee was after the wreck was hard as well, but EMS kept reassuring me that he was being checked out and was just fine. Once in the ambulance they brought both kids in so I could see that they were okay before I was transported to LSMC.”