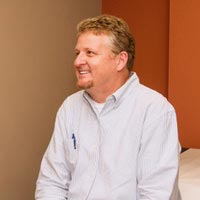 Patrick Hamilton doesn’t know how it happened. One minute he was cruising on his new dirt bike, and the next minute he was cruising to the hospital in the back of an ambulance. “Nobody saw me crash, but apparently I was lying face down in the mud,” says Hamilton who is a well-known attorney in the Kansas City area. “There was nothing wrong with my bike or protective equipment, so it was probably just a weird turn in the air.”

Hamilton has foggy recollections of his time in the hospital following the accident, so he relies on the memory of his wife and Adam Kaye, M.D.

“Dr. Kaye basically told me that I wouldn’t be working today, and I’d still be on a ventilator if it wasn’t for having rib plates,” says Hamilton of the rare and relatively new procedure for patients with multiple rib fractures that helped saved his life.

Kaye is a general and trauma surgeon at Overland Park Regional Medical Center who performs Open Reduction and Internal Fixation Surgery (ORIF) on patients who have broken multiple ribs that are displaced and causing other severe problems. The innovative procedure, commonly referred to as rib plating, involves fusing broken ribs together with bendable titanium plates, similar to the method used to treat many other broken bones in the body.

“Rib plating is still in its infancy,” says Kaye who hopes that the procedure grows in popularity with patients and physicians once the word is out. “Previously, people with broken ribs used to just live with it and take pain medications.”

The long-term effects of living with broken ribs can cause a host of other problems such as chronic pain, trapped nerves, breathing issues, pneumonia and malunion or misalignment of the healed bone. Kaye thanks the technology that makes rib plating possible for helping to prevent these problems.

“The reason we can treat rib fractures this way is new technology,” says Kaye who has completed approximately 16 of these surgeries since he began performing the procedure in May 2011. “They finally determined a proper plate for the shape of the ribs.”

Hamilton knows it was a lot, but he doesn’t know exactly how many ribs he broke in his dirt bike accident. Kaye does.

“It was eight, and that’s the most ribs that I’ve ever treated at once,” says Kaye who acknowledges that Hamilton was one of the most critical patients that he has ever treated with multiple rib fractures.

Hamilton’s respiratory system was failing prior to the surgery, but after, Kaye says that Hamilton had a great outcome given how sick he was.

“He got off the ventilator quickly, and he could instantly move forward with recovery,” says Kaye who says that the typical hospital recovery after rib plating could be as little as three days for a patient without ventilator support.

Despite the astounding results from rib plating operations like Hamilton’s, Kaye and his team do not take these surgeries lightly. The procedure usually involves a large incision that requires recovery time of its own. In most cases, candidates for rib plating must have at least three broken ribs that are displaced and creating additional duress.

For Hamilton, not having his ribs plated could have meant an eternal hiatus from dirt bikes. For now, it means he’s taking a mini-break, mainly he says, because he loves his wife.

“I really can’t afford to fall off a bike again,” says Hamilton who sold his bike shortly after the accident due to his wife’s insistence. “I started volunteering at the hospital instead to give back to the folks who helped me.”

Hamilton credits Dr. Kaye for helping him to feel normal again, and, despite sensing a “tickle” occasionally when he coughs, he says that he would never know how many plates are inside his chest. Hamilton continuously counts his ribs for the many people that fell into his life when he fell off of his bike.