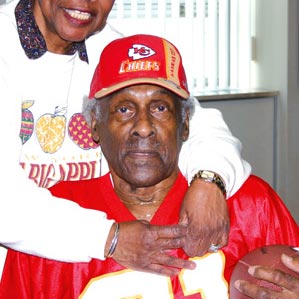 Hillard Rogers is 79-years-old and has been a survivor of prostate cancer...not just once...but twice! He was first diagnosed with prostate cancer at the age of 69 following a routine physical in which his doctor did a PSA. “My doctor called me and said that my PSA test was high and that I had cancer.” Hillard made an appointment to see John Sheldon, M.D., a radiation oncologist at Research Medical Center. “Dr. Sheldon made me feel comfortable and took as much time as I needed in order for me to understand what was going to happen.”

For the next seven weeks, Hillard went through the standard course of external beam radiation therapy. Hillard is a big Chiefs fan and looked forward to his daily treatments. “Every day, I felt like I was going home, from the greeting that I received when I walked into the door, to the warm and friendly radiation oncology staff that I could laugh and joke around with. I especially liked it on football days when he would come in with his Chiefs jersey on and the staff would be dressed in red and Chiefs scrubs.”

Over the next eight years, Hillard did very well. He went to the doctor to get his PSA level checked every year just to make sure he was still cancer-free. It was at one of these visits that his PSA was found to be elevated once again and the cancer had returned. With the second diagnosis of prostate cancer, the prognosis for Hillard was more serious. Hillard, once again turned to Research and Dr. Sheldon for treatment. “I wasn’t worried...worrying would only make matters worse. I continued with my daily routines and didn’t miss a day of work!” This time, Dr. Sheldon recommended the high-tech treatment of salvage brachytherapy, involving the implantation of radioactive seeds into the prostate gland.  Success was achieved, as Hillard’s PSA level dropped to zero, and remains there.