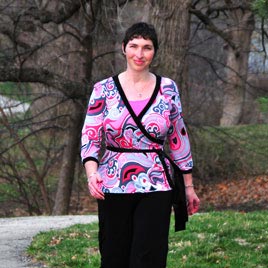 Christina McGinnis doesn’t consider herself an avid sports fan, but she does have a personal definition of a teammate. So when McGinnis was diagnosed with Stage 1b breast cancer on November 4, 2010, she knew her oncologist needed to be the type of doctor to suit up and show up.

“Dr. Graff was open, honest and comforting,” says McGinnis. “She guided me through this very scary time in my life. She was the partner I needed to help me understand my breast cancer and fight it head on.”

Though McGinnis doesn’t have a family history of breast cancer and no risk factors, she has been vigilant in conducting monthly breast self-exams since her early 20s. Nearly 70 percent of all breast cancers are discovered through self-exams, and with early detection the five-year survival rate is 98 percent. Those numbers add up for McGinnis, who found her lump during one of her regular self-exams.

“I have fibrous breasts, but I knew intuitively when I found the lump that it was cancerous,” says McGinnis, an administrative assistant at Overland Park Regional Medical Center.

McGinnis, who is also committed to yearly mammogram appointments, scheduled a visit with her OB/GYN. He sent her for a diagnostic ultrasound and a needle biopsy. When the results came back revealing Stage 1b breast cancer, McGinnis wasn’t shocked. She delivered the news to her husband of 22 years, at 4:44 p.m. on Nov. 4, 2010 when she was four miles from the Texas border and her husband, supervisor of plant operations at Overland Park Regional Medical Center, was sitting in the car of a Home Depot parking lot in Belton, Missouri.

“He wasn’t as calm as I was,” says McGinnis, who remembers the scene as vividly as if it happened yesterday. “He has been there for me every step of the way.”

McGinnis underwent a lumpectomy in November 2010 and a partial mastectomy in January 2011, along with four sessions of chemotherapy and 33 rounds of radiation.

Enter Dr. Graff at Research Medical Center. McGinnis wanted a second opinion on her breast cancer follow-up care and sought that out with Dr. Graff. There was an instant patient-doctor connection, and McGinnis chose Dr. Graff as her new teammate in the fight against her disease. In the midst, McGinnis realized that Dr. Graff had empowered her with indispensable knowledge about breast cancer.

“Dr. Graff is very open, honest and comforting,” says McGinnis. “She’s not afraid to ask the hard questions and find answers. She digs for information, and educates me along the way.”

McGinnis plans to use her experience as a breast cancer survivor to educate other women about the power of not just self-exams and being proactive, but also about the importance of having a physician who is a partner.

Dr. Graff believes every woman deserves a physician who communicates effectively, listens and answers questions. “Breast cancer is one of the most frightening times in a woman’s life,” she says. “My approach to medicine is to personalize it—certainly there are standards that unify care—but each person is unique.”

McGinnis is an advocate for women taking charge of their well-being, and finding a physician who fits their needs.

“I want to encourage other women to pay close attention to their health,” says McGinnis, the mother of three. “And I want them to have medical resources like I did with Dr. Graff, who reassured me that I was receiving the best possible medical care.”

McGinnis says she’s in the fourth quarter of a winning game.

“My focus is back to being the best wife, mother, employee I can be,” says McGinnis. “With the help of Dr. Graff and my faith, I’m winning perhaps the biggest fight of my life.”