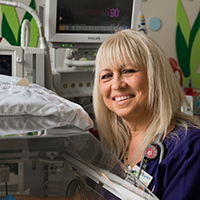 From the moment she started caring for babies in 1975, Charlotte Warren, RN, never considered another nursing specialty. In the span of her 40+ year career, clearly much has changed in the NICU field.

She joined the NICU at Overland Park Regional Medical Center in 2004 after starting her career at Research Medical Center - part of HCA Midwest Health - in 1975.

A graduate of the Research College of Nursing, Charlotte's first job was caring for sick newborns at Research Medical Center. "I got a feel for it then and was hooked," said Charlotte. In 1980 a unit dubbed the "special care nursery" opened with a dedicated neonatologist and nurse practitioner to lead the team.

In that era, the NICU journey began with the birth of a premature or sick baby. Ultrasound wasn't available yet, so life-threatening health issues often weren't discovered until a baby was born. "Now it begins long in advance, with sonograms and ante-partum care for high-risk pregnancies," said Charlotte. Technology and ventilator systems improved over time. But the introduction of surfactant to help underdeveloped infant lungs grow was a game-changer for the profession. "That transformed everything in the 1980s and 90s," said Charlotte. As use of surfactant became more widespread, infant survival rates and outcomes improved.

For Charlotte, NICU nursing is about much more than sick babies. Shepherding families through the NICU experience as nurse, counselor and teacher is one of the most rewarding aspects of the job. "You're taking care of the parents, too, and often building lifelong connections with many families and children. It's so gratifying.”

Nursing skills have evolved over the years, and as part of the NICU team, Charlotte's participated in numerous professional development opportunities to hone her skills. She's especially proud to be part of the care team at OPRMC, where the Level III, 70-bed unit offers the highest level of life-saving care for babies and their families. In an average day, the unit cares for 46 preemies facing a variety of complex health challenges.

"I can't imagine doing anything else, anywhere else," said Charlotte. "It's a place of miracles."