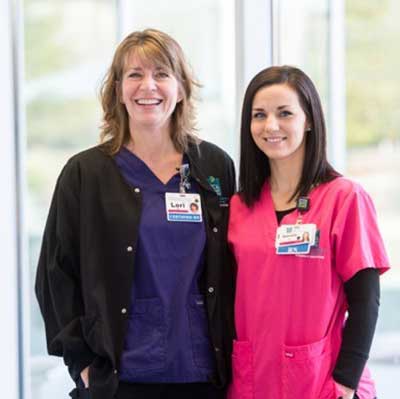 Facebook is a great place to give someone a shout-out for providing support during an emotional time. That’s what Dani Hoops was looking to do when she tracked down Lori Moody, a NICU nurse at Overland Park Regional Medical Center, online.

“I’m sure you don’t remember me but you took care of my son in the NICU for a short time,” Dani’s message began. “My son was born at 41 weeks and was admitted to the NICU for low temperatures and blood sugars. The doctor ordered a head ultrasound which revealed that our baby had a rare brain malformation called holoprosencephaly, and the outlook was grim. He told us he would not live a normal life, that he would most likely die in his sleep and probably not live longer than six months. I looked at you, and you had tears running down your cheeks. You cared. The reason I want to thank you is because you said something that you probably don’t remember and didn’t realize what an impact it would have on us. Your exact words to me were, ‘Just take him home and love him. The rest will come later.’”

But Moody did remember, the same way she remembers her own NICU journey when she gave birth to very premature twins 13 years ago.

“I know what it’s like to have a premature baby, and to be given some hard news,” she recalls. “So we got to know each other, but then she and the baby went home and that was the last we heard. I’d always wondered what happened.”

Now she knows. Hoops’ son is three years old, and loves “swinging, being tickled, cuddling, bouncing, music, and silly noises,” according to his mother, who credits Moody’s immediate, visible support as giving her the strength to get through those early days.

“I believe you were our nurse for a reason,” she said in her Facebook note. “You shared with us that you have twins with cerebral palsy and that they are happy! On that day our worlds were turned upside down, but today, I’ve never been happier and my heart has never been so full of love and joy. Part of that is thanks to you. You gave us the gift of acceptance. Right there in that NICU, I made up my mind to buckle up for the ride ahead and that I would fight for my son who I love so fiercely. I just wanted to thank you for your empathy, care and those few powerful words that changed me forever. As a NICU nurse, you touch lives every day, and you save lives every day, but you also impact the parents and we can never thank you enough.”

If that was the only communication the two had, it would have been a nice reconnection. But these days, if Hoops wants to talk to Moody, she doesn’t have to rely on social media. Previously a rehab nurse at another facility at the time of her son’s birth, Hoops has gone through the additional training to become a mother-baby nurse, and now works at Overland Park too.

“It really has come full circle,” she says. “Now I can use my experience to be there for my patients who have babies in the NICU, or who have gotten an unexpected diagnosis and outcome. I can go back to what I felt, and what Lori did for me, and use that in the care I give my patients.”

And for Moody, who counts among her coworkers many nurses who took care of her own children when they were born at nearby Research Medical Center 13 years ago, it’s a tangible reminder of the strong role that empathy plays in healthcare.