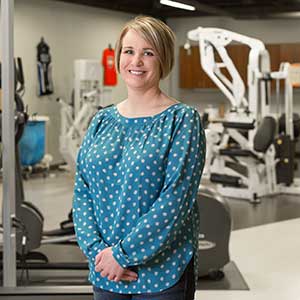 Flashback to fall of 2017— Michelle Hudson had a story to tell and she needed someone to listen, specifically a surgeon. Over the years, the 39-year-old Bonner Springs, Kansas, resident had endured seven surgeries to her right shoulder as a result of overuse, injuries and trauma suffered during her college softball career. Each surgery provided some relief, but no resolution to the shoulder pain and instability. In addition to frustration that her quality of life and career as a physical therapist was adversely impacted and an overall sense of isolation, Hudson felt that doctors weren’t hearing her concerns about each chapter of her shoulder’s surgery and the subsequent results.

So, when Hudson was told that she needed shoulder replacement surgery, something in her gut told her that wasn’t the solution—at least not at this point in her life.

“Being a physical therapist and working in outpatient rehab, I was apprehensive and wanted that to be a last resort,” she says. “And I’m young for replacement surgery. Something instinctively told me to get another opinion.”

In October, after searching for orthopedic surgeons across the country with good reputations for shoulder surgery, Hudson heard about someone right in her backyard—Matthew C. Daggett, D.O., Orthopedic Surgeon at Lee’s Summit Orthopedics and Lee’s Summit Medical Center.

“I actually had surgery scheduled with another provider when Dr. Daggett came to my attention,” Hudson says. “After researching his impressive credentials, including his fellowships, I decided to make a consultation appointment. I was thrilled to find someone with this level of expertise, so close to home.”

Hudson went to Dr. Daggett’s office with her damaged shoulder and story—and to her delight, he spent 45 minutes with her, listening to her history from beginning to end.

“He took the time to get the entire picture of my shoulder saga, which I appreciated,” Hudson says. “After doing an MRI, Dr. Daggett thought others may have missed a key element about my shoulder—that it was actually unstable in a different direction. He suggested another surgery, not replacement, and was confident, but realistic.”

Dr. Daggett encouraged Hudson to take time to process his findings and recommendation.

“After listening, Dr. Daggett quietly said, ‘You know, people need to have hope,’” Hudson says. “It was at that point he proved his compassion. Not only was he an excellent surgeon, he genuinely cared. It was the first time in years that a doctor didn’t say ‘I don’t know.’ Dr. Daggett didn’t make promises, but he had a viable option and was optimistic.”

Hudson drove through a winter storm to Lee’s Summit Medical Center on the morning of January 11, 2018, for surgery. What could have been a stress-filled day softened when she encountered the medical staff.

“They were warm, friendly, welcoming,” Hudson says. “I was nervous, of course, about yet another surgery, and they made sure to put me at ease. I’ve been in healthcare long enough to know that type of attitude starts at the top, with solid leadership.”

Hudson’s recovery is going well and she’s looking forward to someday getting back to hands-on work with patients, which is her life’s passion. Eventually she wants to train and run a half marathon, return to the gym and support her niece as she pursues gymnastics.

“I wouldn’t wish eight surgeries on anyone, but I do know, in the end, the journey will make me a better healthcare provider,” Hudson says. “And Dr. Daggett shared something very powerful with me about a former mentor who told him that if you listen to the patient, they’ll tell you what’s wrong.”

Although Hudson’s shoulder story isn’t yet complete—once the right one is rehabbed, she’ll consider having surgery on the left one—she’s grateful that Dr. Daggett started their patient-physician relationship by listening.