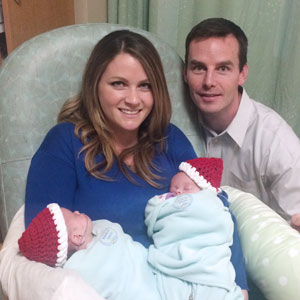 Poignant memories from the two months that Charlotte and Jack Tiehen lived in the Overland Park Regional Medical Center (OPRMC) Level IIIb Neonatal Intensive Care Unit (NICU) will no doubt stay with mom Lindsay Tiehen forever. There was fear, overwhelming emotion and quiet moments of holding her children’s hands through isolettes; small victories as the babies began to grow and thrive; the homecoming on New Year’s Eve.

But teamwork is probably 30-year-old Tiehen’s predominant memory during those 60 days—the collaborative efforts of a group of specialists, physicians, nurses, and other medical professionals to save her babies.

Tiehen gave birth to the preemies on October 30, 2014—at 28.5 weeks, nearly three months before the twins were to make their debut.  During an emergency C-section, 18 people—including Anthony Heit, M.D., Ob/Gyn and Errick Arroyo, M.D., Ob/Gyn— assembled in the OPRMC operating room, working quickly to deliver the tiny newborns and whisk them to the hospital’s acclaimed NICU for specialized care.

“I vividly remember all of us being surrounded by this amazing group of people, intensely focused on me and the safe delivery of Charlotte and Jack,” Tiehen says.

An exhausted and anxious Tiehen got to plant a kiss on Charlotte and Jack’s cheeks before they were transported upstairs to the NICU.

“My husband, Mike, followed them,” Tiehen says.  “It was a scary time.”

“My entire hand could cover their little bodies,” Tiehen recalls.

I vividly remember all of us being surrounded by this amazing group of people, intensely focused on me and the safe delivery of Charlotte and Jack.

Lindsay and Mike were supported by the OPRMC NICU team as physicians and nurses tended to the twins in the days following their birth.

“What Mike and I experienced was authentic, compassionate care, not just for Charlotte and Jack, but for us, too,” Tiehen says.  “The nurses and physicians calmed us and reassured us, ensuring our emotional needs were taken care of.”

Once Tiehen was discharged from the hospital, she, along with Mike, visited the babies every day.

“When I wasn’t there, I could call any hour of the day or night and check on Charlotte and Jack,” she says.

On December 31, 2014, the newest members of the Tiehen family—each weighing more than 6.5 pounds—were released from the NICU, two months and a day following their momentous birth.

“It seems like a lifetime ago,” Tiehen says, “but what I will always cherish is the TLC given not just to my babies, but to Mike and me. The collective efforts of the team were remarkable.”