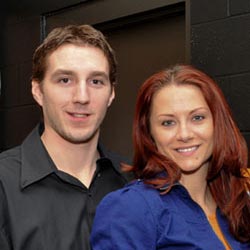 When Bill Vandermeer shattered both of his heels after falling nearly 25 feet from a ladder, his professional hockey career should have been over.

“It’s a career ending injury,” said Matt Hess, director of Sports Medicine and Wellness at Centerpoint Medical Center. “There’s not a documented case of someone returning to professional sports after such an injury.”

The fall was a horrific accident. Vandermeer was helping a friend in Oklahoma City cut tree branches in May 2010 when a large limb swung around and knocked him to the ground. He managed to throw aside the chainsaw and push himself free from the ladder before landing feet first on a concrete driveway.

He fell to his knees in terrible pain. His feet began to swell almost immediately.

“It seemed to happen in slow motion” said Vandermeer, a forward for the Missouri Mavericks hockey team. Unaware of the extent of his injuries, his friend drove him to an area hospital, where he was stabilized before returning to Independence.

In severe pain and unable to stand, the 26-year-old Canadian arrived at the Sports Medicine and Wellness Department at Centerpoint Medical Center. His feet were severely swollen. The X-rays and CT Scans revealed that both calcanei, or heel bones, had suffered multiple fractures. Surgery, however, would have to wait three weeks for the swelling to go down.

“In the CT Scans, my heels looked like sawdust,” Vandermeer said. Surgery would be necessary because of the magnitude of displacement and the number of bone fragments. Doctors, however, believed his heels could be repaired. Whether he could return to the ice was still in question.

With the swelling down, Melton and Ballard embarked on a 3 ½ hour surgery that would entail reconstructing Vandermeer’s heels using metal plates, screws, existing bone fragments and bone substitute. It was a demanding surgery with potential post-operative risks including infection and delayed healing of the incisions and reconstructed calcanei.

Although a success, it would be 10 weeks before Vandermeer would be able to stand. The challenge for Hess and athletic trainer Wes Fillingame was making sure Vandermeer’s body remained strong during those 2 ½ months. When it came time for him to leave his wheelchair and begin to walk, he needed to have good upper body and leg strength.

Unable to stand, the rehabilitation was non-conventional. Vandermeer kept up his strength through grueling rehabilitation sessions that included swimming and a variety of resistance exercises for his thighs, core and upper body.

“Bill is the toughest most determined young man I have ever met,” Hess said. “He never complained. His attitude was so important to his recovery.”

Vandermeer was not just a patient. He was a key member of an outstanding Sports Medicine team. Because of the nature of the injury, there was no roadmap to recovery. Vandermeer would convey daily how he felt and what level of rehabilitation he believed he could tolerate.

“There simply was no protocol for this,” Hess said “The surgeons, myself, Wes (Fillingame) and Bill … we talked constantly about his progression and truly worked as a team to get the best outcome possible for Bill.”

Throughout the recovery, Vandermeer was committed to skating – and walking – again.

“I stayed positive,” he said. “I knew if I worked hard enough, I’d be able to lead a normal life. I broke my heels, but it could have been so much worse. In the scheme of things, it’s not that big a deal.” Some might choose to differ but that is one of the reasons why Vandermeer overcame such odds.

He also was blessed with a supportive wife, parents, friends, a hockey franchise that stood by him, outstanding physicians, people in the community and a sports medicine team that was second to none.

“My wife, Janna, deserves the gold medal,” he said “She was unbelievable.”

Vandermeer returned to the ice 2 months ahead of the doctors’ schedule. After a six-month recovery, he played his first game on Nov.26 at the Independence Events Center. He always knew he’d play again. It’s something he had to prove to himself and to others.

“I had good people around me,” he said. “I will never be able to fully thank Janna, Matt (Hess), my doctors, my parents and all those who helped me through my injury.” Vandermeer is grateful for all he received. He beat the odds. His recovery was nothing short of a miracle.

“We were successful because we worked as a team,” Hess said. “We had one goal in mind – to see that Bill could skate again.”