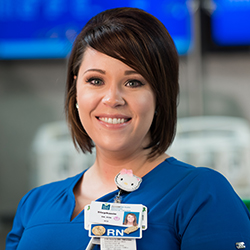 For ICU nurse Stephanie Wasson, Christmas of 2016 was about giving back—staying long after work to talk with and comfort scared families.

“I remember what it was like to have my own family there over Christmas, scared and worried,” she says. “So I needed to be there for others.”

Newly married in June 2015, Stephanie was thrilled to find herself pregnant a few months later. But around Thanksgiving, elation turned to heartache as it became apparent the pregnancy wasn’t viable. On Dec. 2, Stephanie underwent an outpatient laparoscopic procedure to terminate an ectopic pregnancy. All seemed fine when she went home that evening, until the abdominal pain started—severe, agonizing pain that medicines didn’t help. Thinking it was just residual pain from the procedure, Stephanie withstood it until late that night, then went to the emergency room.

She was released the next morning with different pain medicines to try, but by that evening, her condition had markedly worsened. She tried to eat and was immediately sick, she began slurring her words and she felt the left side of her face drooping. Stephanie’s husband called 9-1-1 and First Responders ruled out a stroke, then quickly transported her to Overland Park Regional Medical Center’s Trauma Center. An ultrasound showed Stephanie’s abdomen filled with fluid, and she was immediately taken for exploratory surgery.

“When one of the operating room nurses saw my condition she took it upon herself to call one of the surgeons, Dr. (Adam) Kaye, at home and say there was a patient in really bad shape, and please come in,” Stephanie says.

Dr. Kaye, a trauma and general surgeon, found a perforated bowel from Stephanie’s earlier procedure, an abdomen filled with waste, and Stephanie in full septic shock. As a general rule, patients suffering from severe sepsis or septic shock are most likely to survive if it’s caught within 24 hours. Stephanie was at hour 27.

That first week, Stephanie underwent five surgeries as Dr. Kaye and his colleagues tried to repair and re-section her bowel, all while trying to keep her stable. On a ventilator, with virtually every organ failing, critically low blood pressure and spiking high fevers, Stephanie was in a coma for 11 days. When she finally did wake up and was weaned off the ventilator, she faced a final surgery to remove scar tissue from her lung. And then finally, after 34 days in the ICU, she went home—weak, with a feeding tube, but healing.

For Stephanie, those days are a hazy memory, but some things stand out—giving OPRMC Chief Nursing Officer Teresa Collins a thumbs up from bed, a wheelchair ride to see Christmas lights, and doctors respecting her ability to make health decisions even when she couldn’t speak or lift her arms.

“That meant the world,” she says. “I was so helpless, but they showed me such respect and they let me make choices when I could.”

That respect was indicative of the care Stephanie received at every point at OPRMC, so much so that a few months later, when an opportunity came up to work at the hospital, she jumped at it. It was a job that allowed her to re-enter the ICU world and accommodated her lingering weakness. And it was a job that allowed her an opportunity most don’t get -- to work every day with people who had saved her life.

“It’s the greatest feeling to work with those nurses who took such good care of me,” she says.

Just a year after her crisis, Stephanie is fully recovered and back in the ICU full-time again—this time as a nurse. She’s forever changed by her experience and she makes a point to share her story with those in the ICU -- friends, families, patients—who may need to hear it. Not everyone comes through on the other side. Hearing Stephanie’s story helps them understand anything is possible.

“You can’t fully grasp the stress a patient goes through unless you’ve been through it yourself,” she says. “So patients know I understand. Sharing my experience gives me purpose, and allows me to accept what happened. This way I am able to pay if forward by helping my patients.”