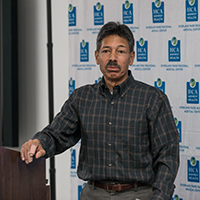 The day after Thanksgiving in 2015, Hector Sanchez was continuing his workout routine.

“I was doing sit ups on the incline bench and that was the last thing I remember,” Sanchez says.

The 59-year-old marathon runner thought he was in excellent shape. He had just ran seven miles on Thanksgiving Day and has ran more than 30 marathons in his lifetime.

“I had no idea that my heart was in trouble,” he says.

Sanchez was having a heart attack. Bystanders at his local gym administered CPR and used the gym’s emergency defibrillator until first responders arrived.

Sanchez was rushed to the Level II trauma center at Overland Park Regional Medical Center, which also operates one of 200 nationally recognized chest pain centers in the country.

“Our Emergency Department and cardiac catheterization labs are staffed around the clock with trained physicians and nurses so that we can reduce the time to treatment during the critical early stages, when actions are most effective,” says Kim Bruno, RN, BSN, Director of Cardiology, Vascular and Pulmonary Services at Overland Park Regional Medical Center.

“Hector was unresponsive and in cardiac arrest when he arrived and had a 95 percent blockage, his potassium was low and he became ischemic, so he decreased blood flow and oxygen to the heart muscle,” says George Pierson, MD, interventional cardiologist.

Sanchez was placed in the Intensive Care Unit, where he received therapeutic hypothermia for 24 hours to help reduce the chances of brain injury. Sanchez then had two stents placed in his left artery.

“Hector is a celebration of life that demonstrates the skill, collaboration and compassion of all those involved in patient care at Overland Park Regional Medical Center.”

Sanchez spent 12 days in the hospital. Three months after his surgery, Sanchez was reunited with the his hospital care team and first responders who saved his life, including members of the Johnson County Emergency Communications Center, Johnson County Med-Act and City of Overland Park Fire Department.

“I was so grateful that I got to thank everyone for taking care of me,” Sanchez says. It’s because of this group of people that I am still alive today.”

Sanchez says his ordeal helped others.

“A couple other folks saw this happening to me, so they all went to get heart tests,” Sanchez said. “And of the four, three passed and one is going to have double bypass surgery.”

Sanchez stressed the importance of heart screenings and regular medical care, because he was like so many who had no idea the state his heart was in.

“I thought I would never have a heart attack. I’ve run 31 marathons,” Sanchez said. “I said ‘this could never happen to me’ and then it did.”